What Is Whole Farm Nutrient Balance?

A Whole Farm Nutrient Balance (WFNB) is a comparison of the quantity of nutrients, typically nitrogen (N) and phosphorus (P) that enter (inputs) and exit (managed outputs) the farm gate. This measure can be visualized as an “Nutrient Yardstick”. In many ways, it is similar to feed input/output efficiency for animal (lbs of feed per lb of gain). These indicators compare inputs used to achieve a useful output. Smaller ratios suggest better performance. A WFNB describes the “whole farm’s” efficiency for utilizing nutrients and is an important indicator of a farm’s environmental performance. 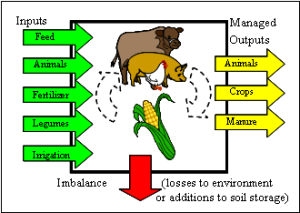 Whole Farm Nutrient Balance estimates nutrient use efficiency by comparing products entering (inputs) and exiting (managed outputs) the farm. Only products with an N or P component are included.

This balance measures only those nutrients that cross the boundary of the farm and does not directly track nutrients flows within the farm. Using the feed to gain analogy, as a pork producer you are not too concerned about the efficiency of internal organs such as the gastrointestinal tract’s ability to capture nutrients for the pig to utilize. However, you are aware that these internal processes affect the overall feed to gain ratio. Similarly, those internal processes (e.g. efficiency of utilization of manure in the cropping system) affects the quantity of nutrient inputs into the farm (e.g. purchased fertilizer inputs to the farm). Thus, a WFNB measure is reflective of multiple internal on-farm processes affecting nutrient efficiency.

Why is A Measure of WFNB Important?

Permitted livestock operations are being asked to provide annual reports to a permitting authority (state regulatory agency or EPA) that provide indirect indicators of nutrient plan implementation. Producers are also required to keep extensive records of planning procedures, plan implementation, sampling, and inspections. Again these records provide indirect indicators of environmental performance. Finally, all producers are required to implement the same best management practices (BMP) whether they are producing pork in Nebraska, North Carolina, or Indiana. However, the effectiveness of these BMP is highly site and size specific.

WFNB provides a “potential” opportunity to set a common performance based goal for all livestock producers but allow individual producers latitude in determining how to reach that goal. It also provides a means of measuring an individual farm’s progress towards that goal. Setting environmental goals based upon a WFNB measure may give a producer greater flexibility and control in achieving an environmentally sustainable animal operation. It may also provide a simpler and more accurate means of documenting environmental performance.

It must be emphasized that WFNB only has the “potential” for achieving these goals. It has been used in policy implementation in Europe but has seen only limited application in the US. At this time WFNB is strictly a voluntary tool a producer may chose to use to track environmental performance.

What Information Would a Producer Need to Assemble?

Several tools are available for estimating WFNB including a pork specific spreadsheet “Calculating My Farm’s Whole Farm Nutrient Balance”. To use this product you will need to have access to the information in table 1.

This project was funded by The National Pork Board