Manure, fertilizer, and other commercially available precision ag maps are not accurately calculating application rates in turns and turnarounds.  This is significant in turn areas, such as field borders or in small fields. In areas where equipment turns or reverses with a k-turn, more product is applied to the inside turn than the outside turn, resulting in more time and application, and significantly changing the application rates in the turn area. The current version of software supplied with GPS equipment UConn Extension purchased in 2020 does not sum material application rates vertically when overlap occurs. The software also does not adjust application rates on the inside and outside of turns to reflect the change in application area covered during a discrete-time interval.  The photo on the left is an example of an as-applied map from the commercial software. The line drawing on the right in the callout box displays the order of the tractor’s

movement during the application. The lines represent the path of the tractor using a dragline to apply manure as it performs a K-turn at the end of the pull.  The lines are formed by connecting the GPS coordinates recorded each second. The red line represents the tractor traveling North until it reached the end of the pass. The green line represents the travel path as the tractor backs up to make the K turn.  The blue line is the path of the tractor as it again travels forward to complete the turn and head South again.  The blue and green lines do not connect because a tractor backed up to some point northeast of the end of the green line, stopped and resumed moving forward again, all during the one-second interval between the ends of the green and blue lines.

The graphic below is the complete map for the field in the example above. If you look closely, you will see a large number of overlaps where a yellow or orange color passes over a darker red color. This should result in the overlapped region changing to one of the green colors if the rates were being summed vertically by the software.

When we realized the maps created by the software were inaccurately representing the results, we began by contacting the company’s tech support center. After exchanging emails and several phone conversations with different individuals, the company indicated that their software was unable to calculate the values we needed. Since the software we had purchased didn’t do what we needed we started asking around to all of the commercial applicators of manure and fertilizer that we knew in the region to see if the software they used provided the functionality we needed in New England. We could find no commercial software package that included the calculations needed to allocate the material correctly in our small fields.

Finding no commercially available software we embarked on what turned out to be a long and arduous process to develop a methodology to create adequate spreading maps ourselves. As faculty members, we have access to ESRI ArcMap which we have used for years to generate field boundary maps, calculate hauling distances between fields and storages, and map farmstead layouts for projects.  We incorrectly assumed that ArcMap would have a ready-made solution for our problem. The process wasn’t as simple as playing connect the dots of the GPS coordinates. The GPS antennas on farm equipment are usually located on the cab of the truck or tractor to protect the antenna and in the case of the tractors to make the GPS available to other pieces of equipment such as planters. The material being applied usually comes out of the back, or side of the spreader some distance from the antenna. Then most application equipment throws the material even further behind the equipment with spinning disks or through pressure pumps, adding even more distance between the antenna and where the material actually hits the ground. To determine these distances accurately we measured numerous pieces of equipment and took a series of measurements between the equipment itself and where the material lands. In the case of manure spreaders, this can be a messy proposition. Once these measurements were completed, it was back to the computer to try to put these on a map. After hand digitizing a couple of hundred data points by drawing reference lines and using measuring tools in ArcMap to generate new points representing the distances behind and to the left and right of the equipment centerline, we finally had polygons to work with. Since we knew the amount of material applied each second, and ArcMap has the necessary tools to calculate the areas of the individual polygons, we could now divide the weight by the area to provide a weight or gallons per square foot of application area. ArcMap also has the tools needed to calculate the cumulative applied material for the overlapped areas by summing vertically through the polygons and summing the rate per square foot value of each layer.

Turns present a different challenge, but the turns cause extreme differences in application rates, so accurate maps require calculating the different application rates on the inside versus the outside of turns. The drawing above illustrates the path of a spreader, in this case a dragline moving 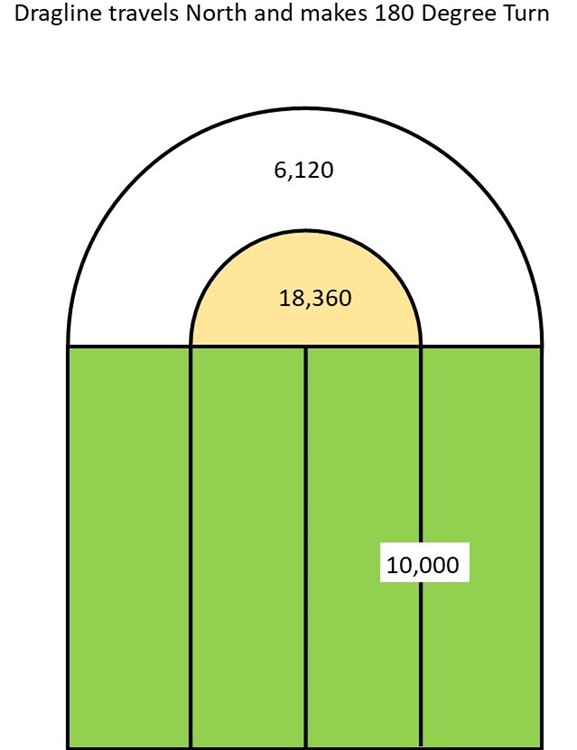 North on the right side of the figure, making a 180 degree turn at the end of the row, and heading back south. The numbers in the section of the curve on the upper right reflect the application rates per acre for a fictional piece of equipment with the following characteristics. The descriptive data is real, but it comes from multiple equipment companies. For this example, we used a dragline toolbar that is 60 feet wide with the left and right halves represented by the three arrows on the lines pointing north and south. The dragline has 16 injectors and is fed by a pump capacity of 5,500 gallons per minute. We spent some time watching videos of spreaders at equipment company websites and timing, with a stopwatch, different spreaders as they made turns. This example uses 13 seconds for the toolbar, to make a 180-degree turn. A 5,500 gallon per minute pump pumps 91.7 gallons per second, or a total of 1192 gallons as the vehicle turns around. We divide 1192 in half to separate the left and right sides of the toolbar and you have 596 gallons applied inside and outside the centerline during the turn. Now we need to turn our attention to the area that was covered. The area of a circle is given by the formula Pi times the square of the radius. The area of the 180-degree turn for the inside of a 60-foot toolbar is given by the formula (3.141593 X (30X30))/2 or 1,414 square feet. Using the same formula, the area of the larger 60-foot radius is 5655. To get the actual area covered by the outside half of the toolbar we need to subtract the area of the 30-foot radius half-circle from the 60-foot radius half circle which comes out to 5,655-1,414 = 4,241. Now that we have the areas, we can divide the left and right areas into gallons.

Given the spreading patterns of modern farm equipment and farmers wanting to ensure complete coverage in a field, overlaps are inevitable. If we are really going to follow the 4R’s of nutrient management, we need better as applied maps that will allow us to know where the manure went, and better more agile fertilizing equipment to only apply fertilizer in the areas of fields that truly need the fertilizer – now that we can identify them on accurate maps. This includes the ability of equipment to lower flow rates on the inside of turns and increase the flow rates on the outside of turns automatically to provide more even spreading rates across the entire field.

Current spreading maps are inadequate for small New England farms. Application overlaps and spreading differentials on the inside and outside of turns result in inaccurate application rates. Current equipment does not account for these differing rates along the turn radii. We have worked out an algorithm and a process to correct for both the turn issue and the overlap issue for straight application such as self-propelled spreaders or toolbars attached to the 3-point hitch of a tractor. The algorithm still needs to be adjusted to connect the polygons representing turns with curved lines rather than the straight lines we currently use. This will improve accuracy incrementally, albeit measurably, since the turn radiuses and the distances involved will only add or remove a few square feet from each polygon which in our hand calculation doesn’t affect the rate per acre more than a few hundred gallons at a time.  We understand the math involved to calculate accurate spreading locations and areas for towed equipment if we have adequate measurements of that equipment and with the caveat that the spreader being towed is always moving forward. In certain cases, such as semi-tractor trailers it is possible for the truck cab, with the GPS attached, to be moving in a circular path – while the rear bogey of the trailer spins in place – which can cause the rear wheels on the trailer to back up during a tight turn.  We haven’t worked out the math on this, and so far, we have found no practical way to calculate this given the state of the equipment.  For semi-trailers we would recommend that GPS antennas be mounted at the front and the rear of the trailers. We need two points to determine the straight line between the points so we can calculate the left and right application distances for where the material hits the ground.

The as-applied map on the next page shows how the current version of our software creates a much more accurate application map from GPS data.  This is the same section of the field shown in the first graphic from the commercial software.  As you can see our solution calculates the areas of overlap and sums the application rates vertically through the layers.  If you look closely at the figure, you will see 3-digit numbers representing the calculated positions of the Left, Right, and Center XY coordinates of the points where the material is hitting the ground each second.  The single-digit numbers reflect the number of times that an individual polygon was applied with manure during the turn maneuver. 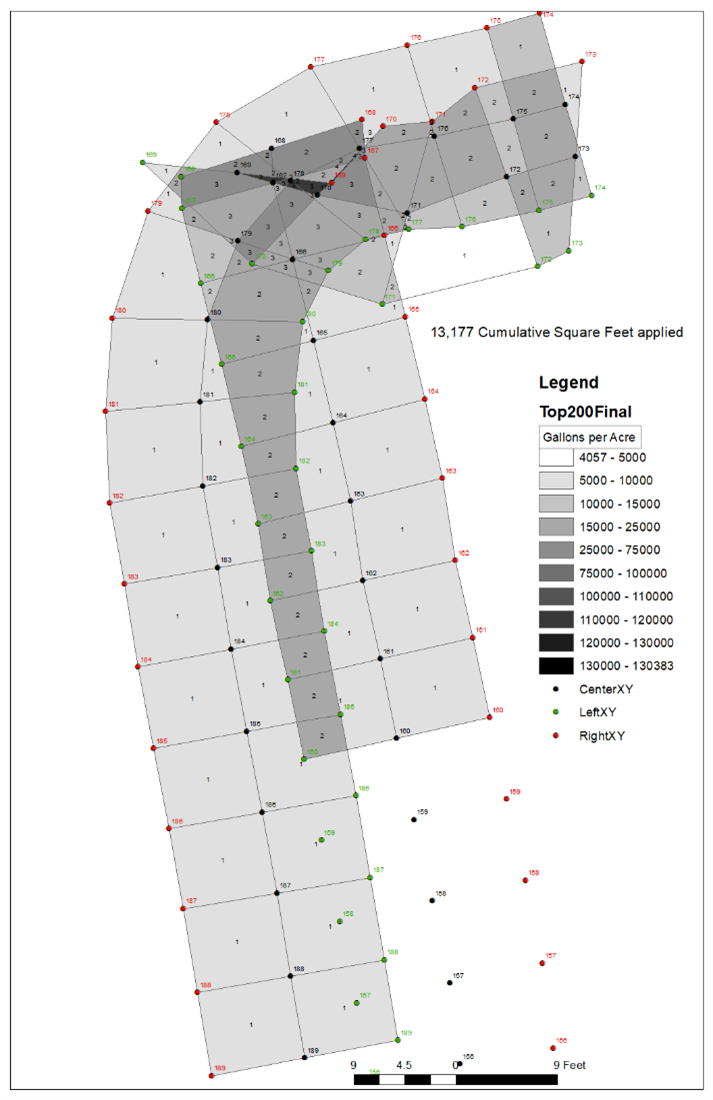 This year we plan to validate our algorithms for the self-propelled and the farm tractor 3-point hitch mounted spreaders.  We hope to expand the algorithm to tractor towed combinations when we receive data from 2 more farms that installed equipment this winter on their equipment.  We will validate our algorithm’s accuracy by applying manure to fields that have had collection pans pre-located throughout the field.  Once we have the spreading map, we can overlay it onto the data from the collection pans that we will geolocate with handheld RTK GPS equipment before applying the manure.  We would also like to rent a pair of RTK GPS loggers to mount on the front and the rear of a semi tanker to verify the movement of the trailer during extreme turns.

Hopefully, we can develop a mathematical model for the semi turns because the alternative – putting 2 farm equipment type GPS antennas on a trailer, will get expensive.