Land applying agricultural and municipal wastes carries an inherent risk associated with nutrient and pathogen runoff and contamination, but with that risk comes a potentially sustainable process to reclaim otherwise residual waste material. Few studies compare the two residuals. The purpose of this study was to investigate the land application of municipal waste water treatment solids (biosolids) versus manure (broiler and swine) and their effect on pathogens, antibiotic resistance and nutrients.

A 5×4 randomized block design comprised of broiler litter, swine effluent, and municipal biosolids treatments were land applied at a rate of 5-8 tons ha-1 for the broiler litter and biosolids, respectively, while effluent was applied at a rate of 32 ha-cm on a cooperator farm established with forage plots over a three-year period. Swine effluent was applied to the surface or surface-applied then incorporated to approximately 7.5 cm; applications were applied once per season. Soil core samples to 15 cm were collected from plots and were specifically targeted to include waste-residual. Samples were collected in the days, weeks and months following land application. Samples were processed for heterotrophic plate count bacteria, thermotolerant coliforms, enterococci, staphylococci, gram-negative bacteria, Escherichia coli, Clostridium perfringens, Salmonella spp., Campylobacter spp., Listeria monocytogenes, antibiotic resistant bacteria and genes, and 16S rRNA.

Immediately following land application, most pathogens and indicator bacteria were detected; however, by the end of the first month, most were at background levels. One day following land application (Figure 1), most indicators were noticeably enriched, but following 1 week, levels began to drop to background by week 8 (Figure 2). Pathogens were rarely dependent on waste, for instance, Salmonella was rarely detected, but was detected in both effluent and biosolids-applied plots. Clostridium perfringens, on the other hand was typically found in swine effluent-applied plots, though biosolids-applied plots were also positive for C. perfringens. Campylobacter spp. was not detected at any time point, and E. coli was fleetingly detected. Differences in phenotypic antibiotic resistance weren’t detected, while antibiotic resistance genes were equally detected in most applied treatments. Overall, the influence of waste didn’t alter 1 6S rRNA levels. Microbial ecology, only briefly investigated via terminal restriction fragment length polymorphisms, yielded slight differences between plot treatments. Overall, waste type had a small influence on pathogen/indicator presence and levels following land application, most likely as a result of minimal pathogen levels and application rates such that detection was limited. The overarching results of this study indicate microbial risks associated with any of the tested waste types will be similar, given overall low pathogen levels; however, further investigation into antibiotic resistance, which should be dependent on waste type, will be a focus of interest. Additionally, given the variability of manures, pathogen levels may vary significantly based on region, climate, and concentrated animal feeding operation. 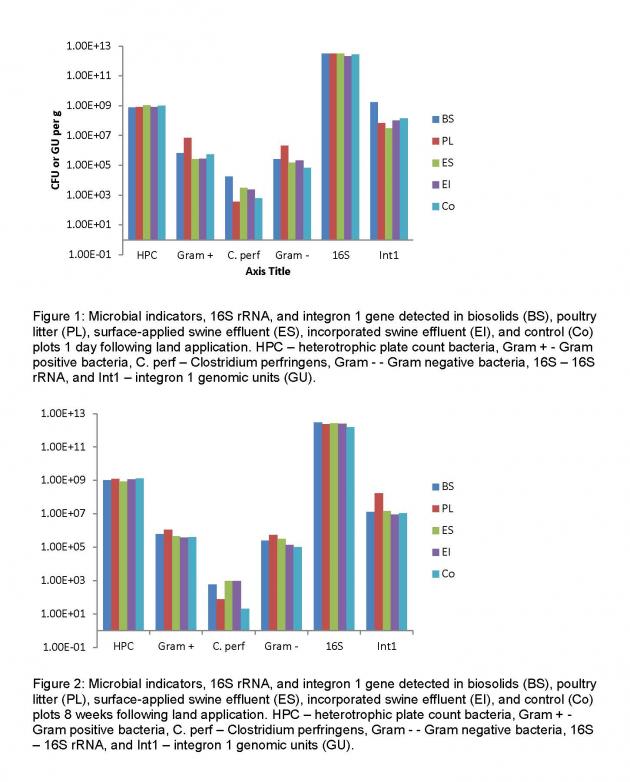 Quantitative microbial risk assessment modeling will be conducted on data, projecting the risks associated with each practice, taking into account a function of waste and time.

The authors would like to thank the work of Cindy Smith, Renotta Smith, Jim Robbins, and our farm and wastewater treatment cooperators.

Loss of the antibiotics florfenicol, sulfadimethoxine, sulfamethazine, and tylosin was studied during pilot-scale static pile thermophilic composting and the effects of temperature and feedstock particles on antibiotic removal rates were tested. The antibiotics were spiked into dairy manure solids and wastewater biosolids, and treatments included aerated and non-aerated manure and biosolids/wood-product (1:3 v/v) composting.

What have we learned

Results showed no significant differences between aerated and non-aerated treatments; on average ≥85%, ≥93%, and ≥95% antibiotic reduction was observed after 7, 14, and 21 d of composting. Greater antibiotic reduction was observed in manure compost compared to biosolids compost for florfenicol (7, 14, 21, 28 d) and tylosin (7, 14, 28 d); however, there was no significant difference for sulfadimethoxine and sulfamethazine. Peak temperatures were 66-73°C, and ≥55°C was maintained for 6-7 d in the biosolids compost and 17-20 d in the manure compost.

Bench-scale experiments conducted at 25, 55, and 60°C showed that lower temperature decreased removal of the sulfonamides and tylosin in both feedstocks and florfenicol in the biosolids. The presence of compost particles increased antibiotic loss, with time to 50% dissipation ≤ 2 d in the presence of solids (60°C), compared to no degradation in their absence. These results indicate that thermophilic composting effectively reduces residual antibiotics in manure and biosolids.