Climate change is an economic, environmental and social threat, and worthy of scientific study. Immediate action must be taken to reduce greenhouse gas emissions and mitigate negative impacts of future climate change. Proposed action can start at the farm level and has the potential of making a contribution to mitigation of climate change. Dairy farmers are able to significantly reduce their emissions by implementing better management practices, primarily through feed production, enteric fermentation, and manure management. We model the corresponding changes in emissions from proposed mitigation efforts to understand their impact on global climate change.

Best Management Practices (BMPs) for dairy systems have been identified and simulated using the Integrated Farm System Model (IFSM). Simulations representative of a large New York farm (1500 cows) and a small Wisconsin farm (150 cows) estimated the emission of greenhouse gases for a whole farm system. Percent reductions were calculated by comparing a baseline scenario without any implemented mitigation, to scenarios that included the identified BMPs. Refer to Table 1 for emission and percent reduction estimates for the simulated BMPs. 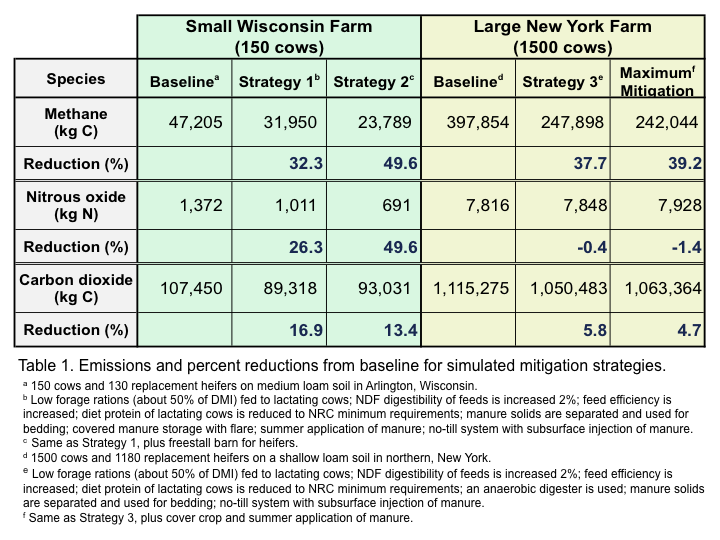 Percent reduction estimates were then applied to a projected “business as usual” emission scenario. This scenario prescribes anthropogenic emissions through 2100 and excludes any climate action or policy after 2015. Taking 2020 as a reference year and 2050 as a target year, we applied the estimated percent reductions to the projected global agricultural emissions. Emission reductions were decreased linearly from 2020 to 2050, and held constant between 2050 and 2100 (Figure 1). This assumes that all farms globally can reduce emissions despite increases in production. To compare the performance of the mitigation measures under future climate change, we employed a fully coupled earth system model of intermediate complexity – the Integrated Global System Model (IGSM). The model includes an interactive carbon-cycle capable of addressing important feedbacks between the climate and terrestrial biosphere. 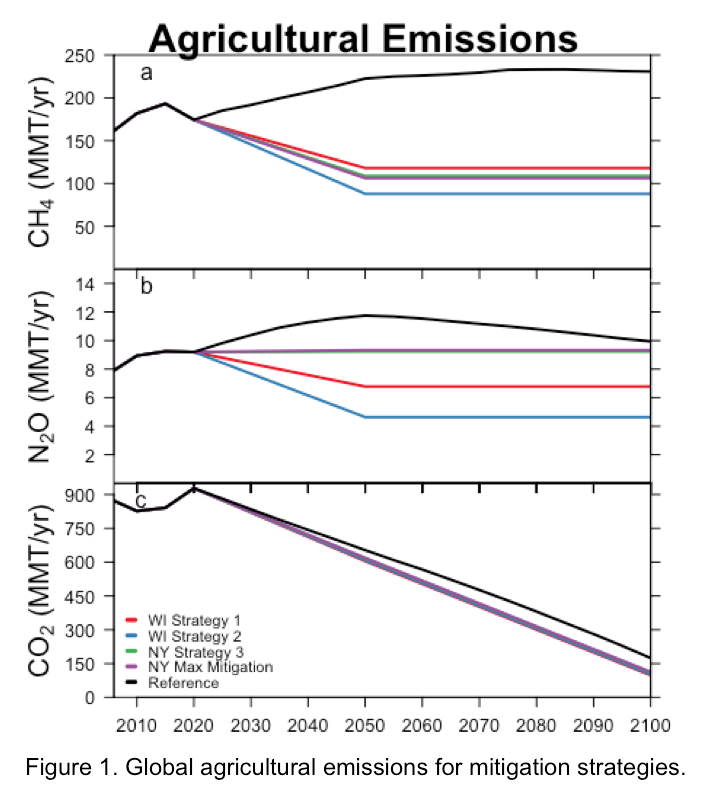 Action taken globally in the agricultural sector to reduce greenhouse gas emissions over the first half of the 21st century is likely to have an impact in mitigating global warming. Following a “business as usual” emission scenario without any climate policy or action beyond 2015, an increase in global mean surface temperature by the end of the 21st century (2081-2100) relative to pre-industrial (1961-1990) levels is projected to be 2.8 C to 3.5 C (Figure 2). This exceeds the 2 C temperature target described as the maximum warming allowed to avoid dangerous and irreversible climate change. An associated net radiative

forcing for the “business as usual” scenario is projected to be 7.4 W/m^2 by 2100 (Figure 3). Adopting the identified BMPs in the dairy sector and decreasing global agricultural emissions by 2050 is projected to decrease global mean surface temperatures for 2100 by 0.2 C and net radiative forcing by 0.4 W/! m^2 on av erage. In summary, this modeled experiment demonstrates that ongoing efforts to decrease greenhouse gas emissions in the dairy and agricultural sector are effective at reducing the overall warming of climate change. 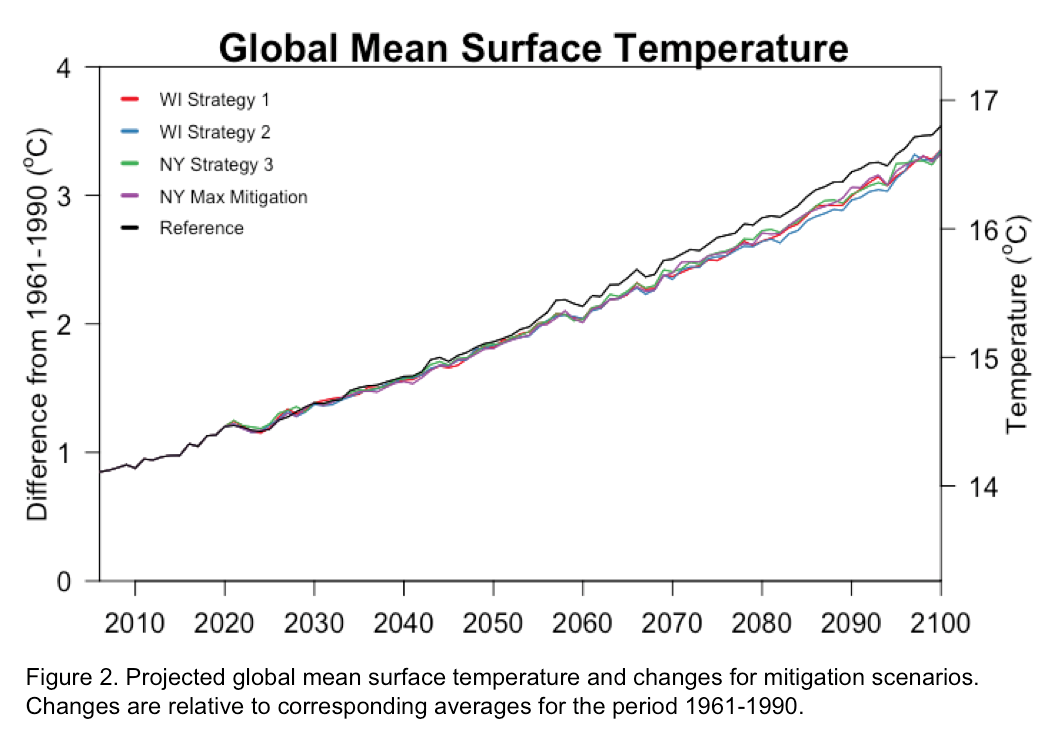 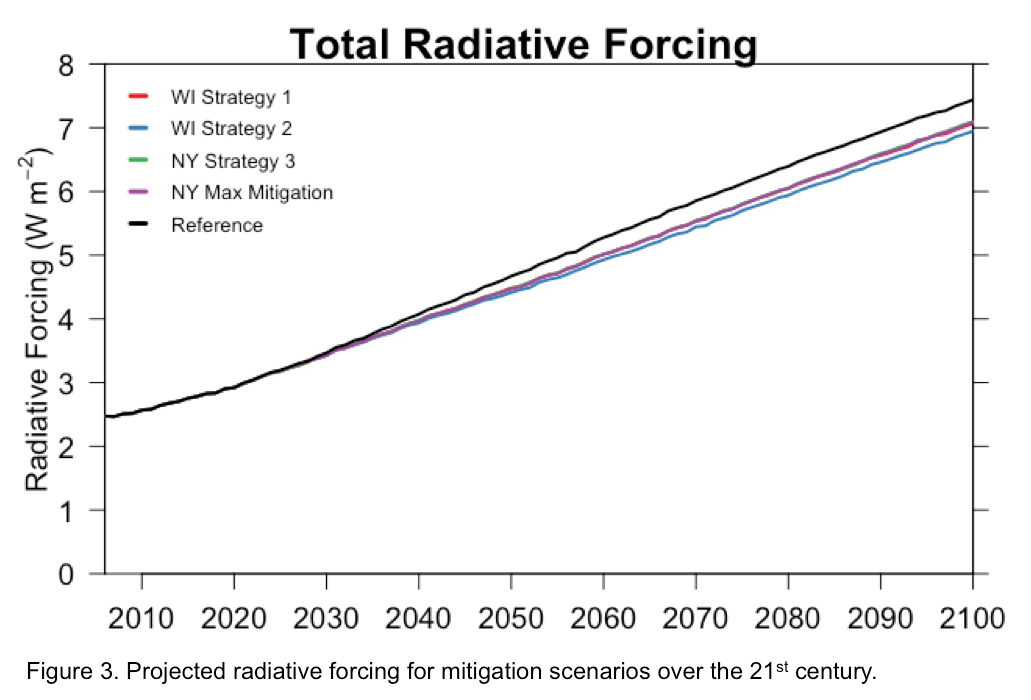 Future work will look further into the evolution of regional temperature and rainfall profiles for the mitigation scenarios. Then, ecological risk assessment methodologies will be applied to determine the probable impacts of climate change by each scenario on agricultural production.