Of the total nitrogen (N) consumed by dairy cows on confinement farms (cows fed in barns), a general range of 20% to 35% is secreted in milk and the remaining N is excreted in manure. The N contained in manure is either recycled through crops after field application, or lost to the environment. To better understand the synergistic nature of feed N and manure N management and environmental N loss from dairy farms, a series of cow, laboratory and field experiments (Figure 1) was undertaken to quantify the relative amounts of N contained in individual ration components that are secreted in milk, excreted in urine and feces, taken up by crops after manure application to soil, and lost as ammonia (NH3) and nitrous oxide (N2O) from dairy barns and soils.

Alfalfa silage, corn silage, corn grain and soybeans were enriched in the field with the stable isotope 15N. Each 15N-enriched component was then fed individually (soybeans were solvent-extracted and the resultant soybean meal was fed) to twelve mid-lactation cows (3 cows per 15N-enriched ration component) as part of a total mixed ration (TMR). The masses of milk, urine and feces produced by each cow were recorded and sampled during the 4 day 15N feeding period, and for 3 days thereafter. This presentation will provide information on the 15N enrichment level of each ration component, the relative amount of each consumed component’s 15N that was secreted in milk and excreted in feces and urine. We will also present the results of a field trial that measured the relative contribution of each ration component’s manure N to corn N uptake during the first and second year after manure application. We will end with explanation of some of the experimental procedures we will use for measuring gaseous N losses after manure applications to barn floors and soils. 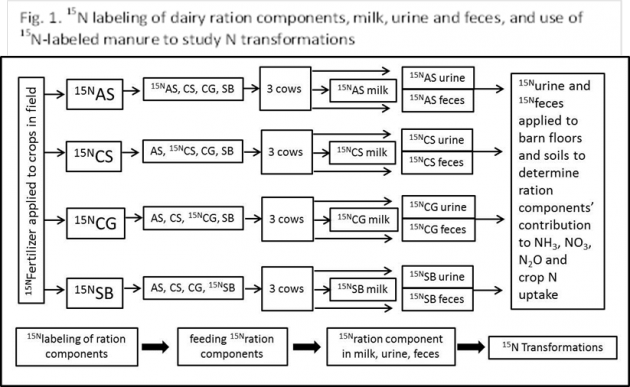 Here we present some preliminary information on 15N labeling of ration components, the TMR that was fed, and some animal responses. Concentrations of fiber, total N and 15N in the ration components are provided in Table 1. 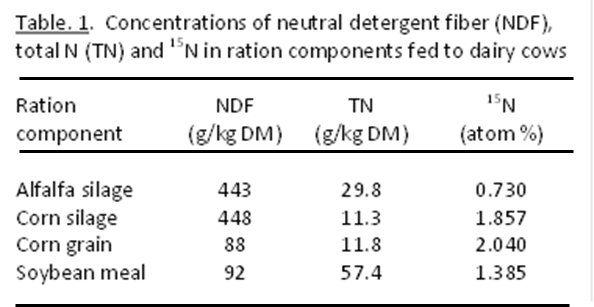 Highest 15N incorporation was achieved with corn (silage and grain) and lowest with alfalfa and soybean. This was due to 15N dilution by the atmospherically-fixed N by these legumes. The methods we used to ensile the 15N-enriched corn and alfalfa, the milling of 15N-enriched corn grain and the extraction of 15N-enriched soybeans to produce soybean meal did not appear to impact TMR intake, milk production or N excretion by dairy cows, as indicated by the narrow range (and non-significant differences among TMR containing the 15N-enriched components) in dry matter intake, N intake, milk production, dietary N use efficiency (relative amount of N intake secreted as milk N) and N excretion in urine, urea and feces (Table 2). 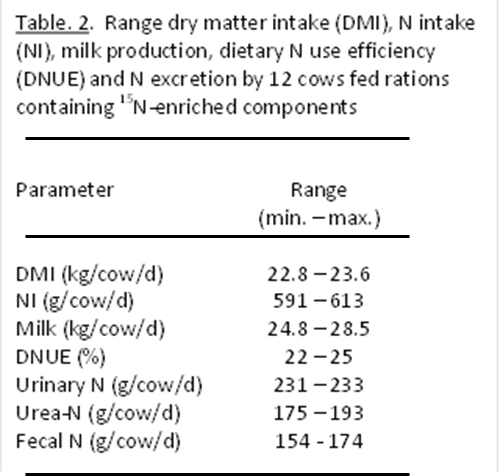 Feces and urine from each 15N enriched ration component will be applied to laboratory emission chambers that simulate barn floors and field soil surfaces, and 15NH3, 15NH4 15NO3 and 15N2O will be measured. Manure-soil incubations, greenhouse and field trials are underway to determine each ration N component contribution to crop N uptake.

The Feed Assessment Tool (FEAST) was used to characterize the farming and livestock system in Limu-Bibilo district in Ethiopia. Prior to data collection, a Sustainable Livelihoods Framework (SLF) was conducted in August 2012. The quantitative data from individual interviews of 18 farmers were entered and analyzed using FEAST. Livestock production is an integral component of the farming system of the study area. Cattle are kept for food, cash, draught power and manure production. For the above average group grazing, crop residues, and cultivated fodder contributes 49%, 25% and 12% to the dry matter (DM) content of the total diet respectively. Similarly, grazing, crop residue, and purchased feeds contributes 33%, 23% and 20% of the DM respectively as to the below average groups. Grazing, crop residues and cultivated fodders are the major feed resources that are contributing 49%, 20%, and 14% of the metabolizable energy (ME) respectively as to the above average group and 32%, 17% and 14% respectively to the below average group. For above average group Grazing, cultivated fodder, purchased feeds, and crop residues contribute 42%, 17%, 16%, and 15% crude protein (CP) content respectively whereas purchased feeds, grazing, and cultivated fodders contribute 35%, 25%, and 15% of CP in the total diet in the case of below average groups. The problems that were raised by the farmers encompass, shortage of feed, scarcity of water, unavailability of cash or credit services, shortage of veterinary service, lack AI service, awareness and communication gap. In light of the problems the study recommends the development of herbaceous forage legumes and fodder trees species which can mitigate the constraints of feed scarcity. Training on cost effective livestock ration formulation techniques to reduce the feed shortages observed must be part of a strategy which requires attention to improve the production of the sector.

The study area Lemu-Bilbilo district is located in Arsi zone in Oromia regional state of Ethiopia. It is characterized by a crop-livestock mixed farming system where dairy production contributes significantly to livelihoods of the smallholder farmers. Market-oriented dairy production based on crossbred dairy cows is also practiced in the district. However, economic benefits accruing from the livestock sector are not significant. Livestock production is constrained by ecological, technical and economic limitations which result in severe feed shortages. Thus, the objective of the current study was to assess feed resource availability and utilization using a feed assessment tool (FEAST) within the context of the overall farming and livestock production systems and to determine the potential of site-specific feed interventions in Lemu Bilbilo district.

What Will Be Learned In This Presentation?

The feed resources in the study area was primarily natural pasture, crop residue (cereals and legumes), purchased feed, cultivated fodder and naturally occurring and collected fodder. Crop residue was a major component in the diet of livestock. Animals rely on crop residues throughout the year especially when grazing pastures are scarce. Farmers who do not have adequate quantity of crop residue from cropping activities purchase additional straw from other farmers who produced cereals in surplus. The straw was usually fed to the animals without any form of processing or manipulation prior to feeding. However, some farmers were aware of mixing straws with linseed cake, wheat bran or salt as a means of improving quality and palatability. The contribution of grazing to dry matter (DM), metabolizable energy (ME) and crude protein content (CP) was relatively high for the above average group farmers who reserve more land for grazing pasture through land renting. Due to limitations of grazing and crop residue resources, farmers in the below average group were forced to purchase feeds. Purchased feeds thus contribute relatively higher to the DM, ME and CP of their livestock diets compared to that of the above average farmers. Feed shortage was identified by both groups of farmers as the most important problem of livestock production. Other constraints like water problem, inefficient veterinary and AI services were similar and equally important for farmers in both groups.