There is growing evidence that soil nutrient cycling is sustained during the non-growing season in the northern regions of Canada. However, the extent of the transformations and loss of fall-applied manure N is not well documented. The NH4-N fraction of liquid dairy cattle manure, liquid swine manure, and ammonium sulfate was enriched with 15N radioactive isotope, and all N sources were applied to bare sandy loams in early November at sites located in contrasted climate (mean annual temperature 1 to 10°C; mean annual precipitation 300 to 1300 mm; mean snow cover depth <5 to 70 cm). The experiment was replicated over two years at each site. Soils were sampled on the week of application, in November, and at intervals until next May. The recovery of applied 15N in soil NH4-N, NO3-N and organic N pools was measured in the 0-30 cm depth. Soil temperature was also monitored at the 5, 20 and 50 cm depths. Although the transformation of applied ammonium was delayed in colder areas, the transformation of 15NH4-N was generally completed by April, generally before seeding of the next crop. Both nitrification and immobilization of fall-applied 15NH4-N occurred throughout the non-growing season at all sites. As a result, residual 15N was essentially recovered as NO3-N and organic N in the following spring. In most cases, more than 50% of fall-applied 15N was not recovered in the following spring. In general, more 15NH4-N was immobilized with manures than ammonium sulfate, possibly because of the presence of fresh carbon in the manure. As a result, more 15N was recovered in the spring with the manure, and this was particularly obvious at the warmer sites. We conclude that a significant portion of fall-applied NH4-N may be lost during the non-growing season, even in areas with cold and long winter period.

It is now recognized that biological processes involved in nitrogen (N) cycling are sustained in agricultural soils under frozen conditions (Clark et al., 2009; Maljanen et al., 2007; Virkajärvi et al., 2010), and that a significant portion of N present in soils in the fall may be transformed and lost during the non-growing season (Jayasundara et al., 2010; Chantigny et al., 2014). However, the extent to which fall-applied N fertilizer, and especially manure-N, can be lost as a function of local winter conditions (e.g. snow cover depth, frost penetration) is not known. Climate models are currently predicting that global warming will result in reduced snow fall, deeper frost penetration and more freeze-thaw cycles in soils of North America (Henry, 2008). This will have impacts on soil biological processes (Groffman et al., 2001), but it is not possible to predict how it may influence the fate of fall-applied N. Our objective was to use a multi-site approach to determine the extent of transformation and loss of fall-applied N during the non-growing season under contrasted winter conditions. 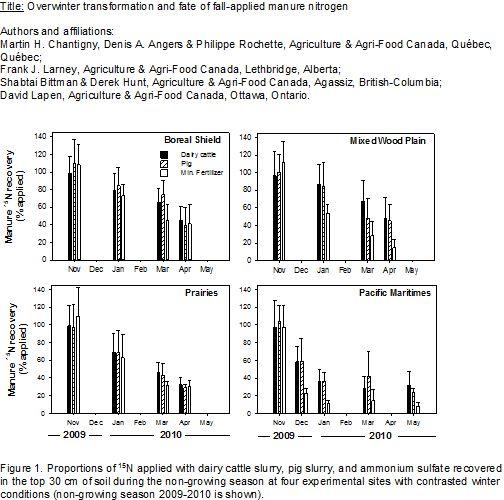 Fall-applied N was transformed and lost throughout the non-growing season at all sites (Fig. 1). Losses were rapid at the warmest site (Pacific Maritimes), and more gradual at the other sites where colder soil temperatures were recorded. Yet, six months after application (late April – early May) only 10 to 50% of fall-applied 15N was recovered in the top 30 cm of soil suggesting very significant loss of manure N during this period. Immobilization and nitrification of applied 15NH4 occurred throughout the non-growing season at all sites (data not shown), and 15N recovered in the next spring was essentially present as NO3 and organic N. At two sites, a greater proportion of applied 15N was recovered in the spring with the manures than ammonium sulfate, and more of this residual 15N was in the organic form in the manure treatments. This suggests that carbon present in the manure stimulated immobilization and retention of fall-applied N in soil. Overall, the results indicate that the readily available fraction of fall-applied N is at high risk of loss during winter, and that changes in soil conditions induced by global warming may not have a great influence on this process or on the manure-N transformation during winter.

Now that we evidenced the significance of losses of fall-applied N from soils during the winter period under varied climatic conditions, we are initiating field work to determine best practices for fall application of manure (e.g. early vs. late fall application; use of additives to delay nitrification of manure ammonia) that will mitigate losses and help efficiently transferring applied N to crop in the next spring.

Scientific papers and reports can be accessed through my webpage:  www.agr.gc.ca/fra/science-et-innovation/centres-de-recherche/quebec/centre-de-recherche-et-de-developpement-sur-les-sols-et-les-grandes-cultures/personnel-et-expertise-scientifiques/chantigny-martin-phd/?id=1181933396583