Why Is It Important to Study Availability of Manure Nitrogen?

Application of fresh and composted manure as a fertilizer source in corn production has long been a useful practice in many sustainable crop production systems especially when phosphorus, and not nitrogen (N), is the primary nutrient of interest. But when manure is applied as the primary source of N, despite several agronomic advantages associated with manure use, there is a high risk of ground water pollution, and often times, would produce lower yields and grain protein than inorganic fertilizers. Nitrogen mineralization and availability from manure is difficult to predict. Therefore estimating the amount of crop N uptake that may be attributed to manure applied in the same year or to its residual impact, can be a useful approach towards quantifying a supplementary quantity of inorganic N fertilizer with the manure. 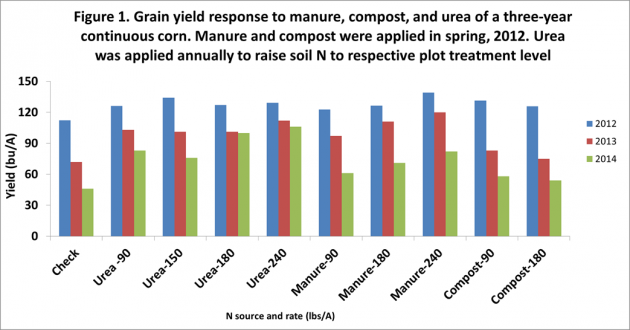 This study measured in situ relative soil N mineralization rates (flux) during three growing seasons of continuous no-till (2013 and 2014) corn in Carrington, ND. We applied fresh (FM) and composted beef feedlot manure (CM) only once in spring 2012 at N rates of 90, 180, and 240lbs/A as FM, and 90 and 180lbs as CM. These rates were applied based on the calculation that 50% of N from FM and 25% of N from CM, would be available the first year. Other treatments were urea at 90, 150, 180, and 240lbs N/A, plus a check at 0lbs/A. In 2013 and 2014 urea was applied to respective plots, based on soil test, to raise the N levels to the respective 2012 N levels. We used the randomized complete block design with four replicates. Three replicates were used to measure soil N (NO3- + NH4+) mineralization rates bi-monthly with Plant Root Simulator probes (PRS™), from the urea fertilized and manured plots at the 0, 90 and 180lb levels at 4-6 leaf growth stage. Four pairs of PRS™ probes were buried in the top 6 inches near corn roots and replaced every two weeks for four sampling dates. We measured yields, protein content, and N uptake.

Yields were generally low in all three years of this study, well below the average for this region. Bi-monthly N mineralization was significantly higher as N increases with urea as N source during the early sampling dates (Figures 2 and 3) and subsequently declined to similar levels as the manure treatments. It is therefore possible that the plants benefited from higher early uptake of N from urea up to the early stages of peak corn N uptake but not enough to produce significantly higher yields than the manure treatments. Analysis of variance showed no significant treatment effects for yields in 2012 (α = 0.05) but grain protein differences were significant. These differences were observed only between the check and 180 lbs N in 2012. The highest mean grain yield was recorded with the 90 lbs N treatment where, the residual soil N at planting was just 33 lbs. The protein level was also significantly higher than the check and CM plot that received 180 lbs N in 2012, and with a soil residual N prior to 2013 planting, at 35 lbs. Each year, grain yields responded positively to N rates (applied as urea) and residual N levels from FM but not with CM. Since corn was grown for three continuous years, unsurprisingly yields declined with years of production since N was not applied to the FM and CM treatments after first application in year one. Similarly, yield decline was observed with urea over the three years but not as steep as the FM and CM treatments. The FM at 240 lbs N, and urea at 180 and 240 lbs treatments produced significantly higher grain protein than the check in 2012 (data not shown). Lower N mineralization and very likely, lower N availability was observed with the CM treatments especially at 180 lbs N, which consistently scored the lowest mean yield and protein in 2013 and 2014. Grain yields were consistently higher at 90 lbs N than 180 lbs N with the CM treatment. 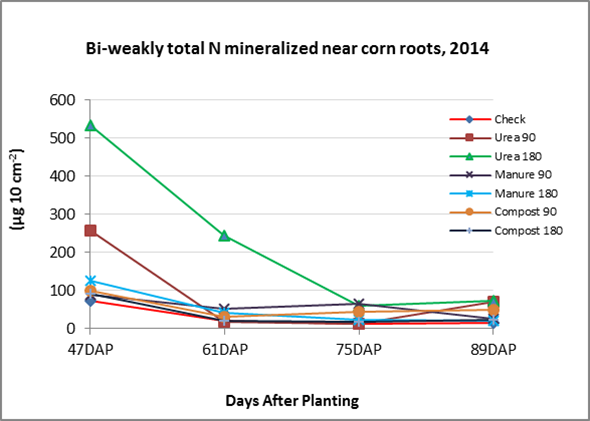 Summer droughts of 2012 and 2013 at this site and possibly, factors associated with continuous corn production (e.g. disease, temporal N immobilization) compounded the effects of urea treatments even though N uptake was consistently higher with urea. Total N taken up in corn grains from the FM and CM treatments increased with N rates but decreased with time (Table 1). From this study, corn grains took up more N from the plots treated with FM than the CM over the three-year period of the study. Subsequent changes in soil conditions such as moisture, N leaching, temperature, can sometimes limit the efficiency of inorganic fertilizer uses, and favoring low cost alternative uses such as manure especially if the prevailing conditions enhance N mineralization from manure or soil organic matter. Based on N input plus soil N status at the beginning of planting every year, corn N uptake efficiency was in the order: Check>FM>CM>Urea, with efficiency decreasing at higher N rates. The minimum proportion of grain N uptake by any treatment to the single highest N uptake for any urea-N treatment (considered as a reference) in a given year, was 42% for the check in 2013.

Relative contribution of nitrogen from the fresh and composted manure treatments and residual N will be used to estimate the percentage of N coming from these treatments over a three-year period. This will be used to establish new studies to assess different levels of fertilizer N to apply with manure to improve on the grain protein content and yields.

More detailed results from 2013 can be found in the North Dakota Corn Growers 2013 Annual Report at: www.ndcorn.org/uploads/useruploads/annual_report.pdf