Animal agriculture is a significant source of ammonia (NH3). Dairy cattle excrete most ingested nitrogen (N); most urinary N is converted to NH3, volatilized and lost to the atmosphere. This fugitive NH3 can contribute to negative environmental effects such as degraded air quality and excessive N in ecosystems. Open lot dairies on the southern High Plains are a growing industry and face challenges that include reporting requirements for NH3 emissions and potential regulation. However, producers and regulators lack a clear quantitative understanding of NH3 losses from the open lot production system.

Most NH3 loss was from the open lot. Ammonia emission rate averaged 1061 kg/d from the open lot and 59 kg/d from the lagoons; 95% of NH3 was emitted from the open lot (Table 2). The per capita NH3 emission rate was 304 g/cow/d from the open lot (41% of N intake) and 17 g/cow/d from lagoons (2% of N intake). Mean N intake was 612 g/cow/d and N exported in milk averaged 145 g/cow/d. The dairy N balance showed that most N was lost as NH3. Daily N input at the dairy was 2139 kg/d, with 43, 36, 19 and 2% of the N partitioned to NH3 emission, manure/lagoons, milk, and cows, respectively (Fig. 2). The NH3 production intensity was 13.7 g NH3/kg milk. We estimated that on an annual basis, from 30 to 35% of fed N would be lost as NH3. Ammonia loss from open lot dairies is more similar to that from open lot beef feedyards than from dairies with closed housing where manure is more intensively managed.

Next steps include sampling during additional seasons to better characterize annual emissions. 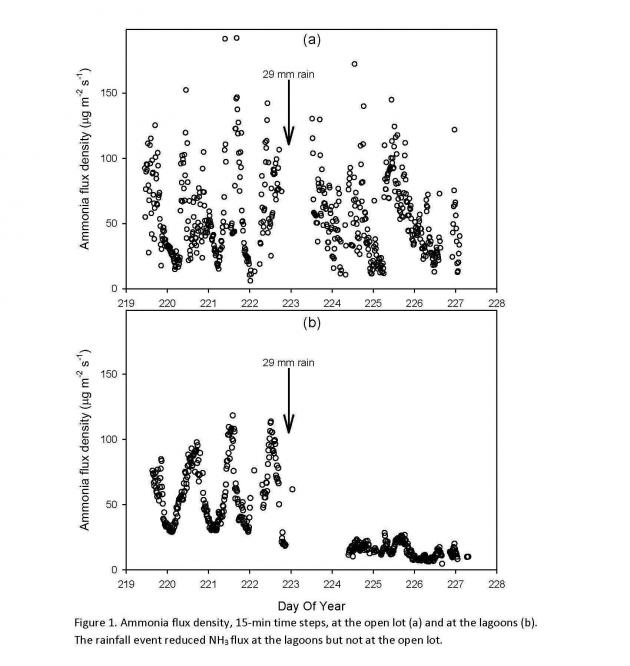 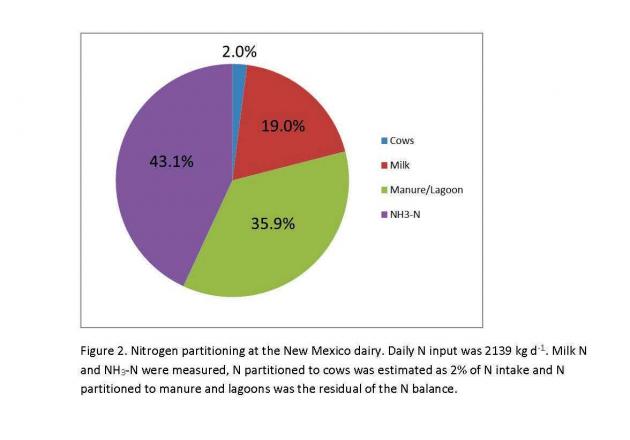 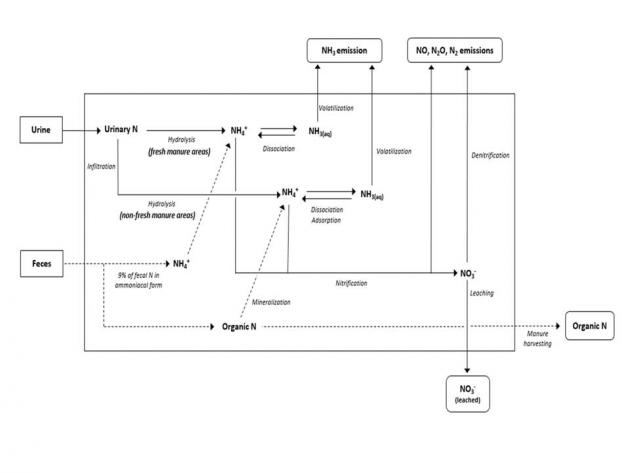 The research community is making good progress in understanding the mechanical, biochemical, and atmospheric processes that are responsible for airborne emissions of particulate matter (PM, or dust) from open-lot livestock production, especially dairies and cattle feedyards.  Recent studies in Texas, Kansas, Nebraska, Colorado, California, and Australia have expanded the available data on both emission rates and abatement measures. Although the uncertainties associated with our estimates of fugitive emissions are still unacceptably high, we have learned from our recent experience with ammonia that using a wide variety of credible measurement techniques, rather than focusing on one so-called “standard” technique, may be the better way to improve confidence in our estimates.  Whereas the most promising control measures for gaseous emissions continue to be dietary strategies  with management of corral-surface moisture a close second for particulate matter, corral-surface management and moisture management play comparable roles, depending on the mechanical strength of soils and the availability of water, respectively.  The cost per unit reduction of emitted mass attributable to these abatement measures varies as widely as the emissions estimates themselves, so we need to intensify our emphasis on process-based emissions research to (a) reduce the variances in our emissions estimates and (b) mitigate the contingency of prior, empirically based estimates.  As a general rule, although cattle feedyard emission factors may be thought a reasonable starting point for estimating emissions from open-lot dairies, such estimates should be viewed with suspicion.

Document the state of the art of particulate-matter (PM) emissions from open-lot livestock facilities, including emission fluxes and abatement measures.

We conducted (a) field research at commercial, open-lot livestock facilities in the southern High Plains and (b) an up-to-date review of the latest literature concerning primary particulate matter emission fluxes and the abatement measures appropriate to the source type. Field research included time-resolved concentration measurements upwind and downwind of the livestock facilities during the hottest, driest times of the year (in the case of dairy emissions) and throughout the year (in the case of beef feedyards); and a 5-month evaluation of stocking density manipulation using electric cross-fences that preserve optimum bunk space for beef cattle on feed. The literature review surveyed research findings from anywhere in the world that were published in refereed journals as recently as March 2015 concerning the same topics.

Increasing the stocking density of fed beef cattle as compared to the industry-wide average during hot, dry weather suppresses dust emissions to a measurable and reasonably consistent degree. Concentrations of PM measured downwind of open-lot dairies vary throughout the day, though to a lesser degree and at lower overall concentrations than those measured downwind of nearby beef cattle feedyards, likely reflecting (a) the comparatively lower intensity of the dairy animal’s physical activity and (b) the greater diurnal uniformity of animal-activity patterns in dairies as compared to those in cattle feedyards. Stocking density manipulation does not appear likely to influence dairy dust emissions to the same degree as it influences feedyard dust emissions. Our confidence in emission-flux estimates from these open-lot systems suffers from a lack of methodological diversity; that confidence would be greatly bolstered by the deployment of measurement techniques that differ from the standard inverse-dispersion-modeling paradigm. The integrated horizontal flux (IHF) approach to emissions estimation, which we are now testing at a cattle feedyard in the Texas Panhandle, will provide some corroborating evidence that will allow us to narrow the range of PM flux estimates in the research literature, a range that now spans more than an order of magnitude when expressed on a per-animal-unit basis.

We will continue long-term, ground-level monitoring of time-resolved PM concentrations at a commercial cattle feedyard in the Texas Panhandle; continue our ongoing tests of the IHF flux-estimation technique; and evaluate eye-safe lidar as a path-averaging monitoring technology for the intermediate path lengths (50-300m) that will permit experimental discrimination of concentration data downwind of adjacent pen areas featuring different dust-abatement measures.