Why Study the Impacts of Poultry Litter on Phosphorus Cycling?

Livestock manures, including poultry litter, are often applied to soil as crop fertilizer or as a disposal mechanism near livestock housing. Manures can improve soil quality and fertility; however, over-application can result in negative environmental consequences, such as eutrophication of surface waters following runoff of soluble or particulate-associate phosphorus (P). In soil, P exists in many forms (inorganic/organic, labile/stable) and the fate of manure P is highly dependent upon soil properties, including soil texture and microbial activity. The Houston Black series is a calcareous (~17% calcium carbonate), high-clay soil that occupies roughly 12.6 million acres in east-central Texas. These Blackland vertizols are agronomically important for the production of cotton, corn, hay, and other crops, but their high calcium and clay content could lead to accumulation of P in forms that are not readily available for plant utilization. Accumulated P could serve as a source of legacy P if mineralized or otherwise transformed in situ or transported with soil particles in runoff.

The specific objectives of this study were to investigate effects of long-term poultry litter application and land-use type (cultivated, grazed/ungrazed improved pasture, native rangeland) on soil P distribution in watershed-scale plots. The goal of this work is an improved understanding of how litter impacts P cycling and availability in these agronomically important calcareous soils.

We evaluated the effect of long-term (> 10 years) poultry litter (broiler and turkey litter) application at rates of 4.5, 6.7, 9.0, 11.2, and 13.4 Mg/ha (wet weight) on P distribution in cultivated (4.0 to 7.4 ha) and pasture (1.2 to 8.0 ha) watersheds near Riesel, Texas. The experiment was initiated in 2000 by the USDA-ARS Grassland Soil and Water Research Laboratory in Temple, Texas (Harmel et al., 2004), where cultivated fields were in a 3-year corn-corn-wheat rotation and received an annual application of poultry litter at predetermined rates. Litter was incorporated into cultivated plots with a disk or field cultivator. Improved pastures received surface-application of litter. Control treatments (no litter application) included cultivated, native rangeland, and grazed improved pasture.

This research clearly showed that use of poultry litter as a nutrient source for both cultivated and pasture watersheds increased concentrations of total P in all extractable fractions, especially at high litter application rates (Figure 1). 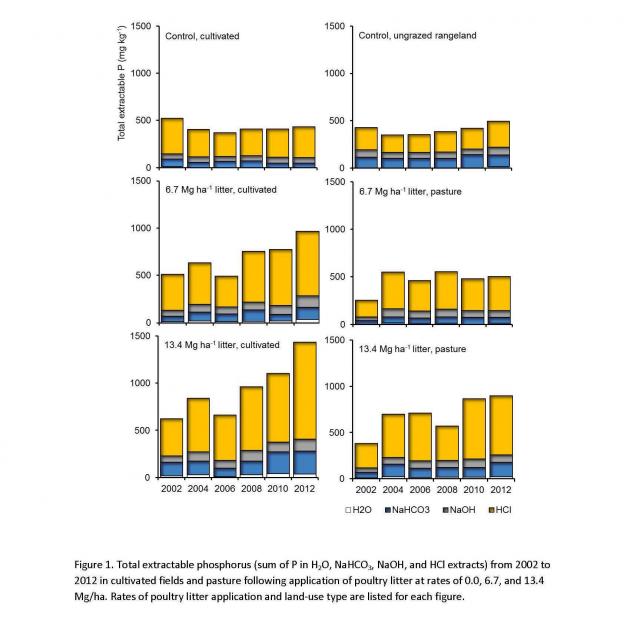 The majority of the total extractable P was found in the fractions that are associated with calcium in the soil (HCl and NaHCO3). An average of 68% of total P was extractable with HCl. However, differences were observed in extractable P distribution due to land-use type and litter application rate. In cultivated watersheds, the inorganic pools primarily affected were H2O- and NaHCO3-P, with some treatments having as much as four times more inorganic P in the labile pool compared with the stable pool. Whereas in the pastureland, increases in soil inorganic P were only found in pasture when either cattle was grazed or when poultry litter was applied at the highest rate.

The addition of litter increased all forms of labile, enzyme hydrolyzable organic P in cultivated plots, compared to plots that did not receive litter (Figure 2). 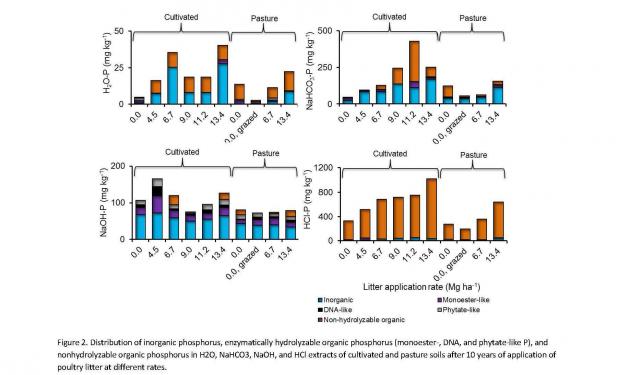 The fate of manure P in the environment is not yet well understood, and the fact that a large fraction of calcium-associated P was not accessible to the enzymes used in this study does not necessarily indicate that this fraction is not accessible to other soil phosphatases. Only very limited studies have been conducted on organic P in the HCl fraction, and more work is required to provide a clearer understanding of how this fraction interacts with soil minerals and organic matter. Results like this long-term study show the potential for high levels of accumulation of P that is not readily available for plant uptake and that could be transferred to surface or groundwaters. In addition, further applications of poultry litter, other livestock manure, or inorganic fertilizer, could lead to increased concentrations of labile P due to lack of available sorption sites in soil. Further study is warranted to evaluate the long-term effects on P distri bution and accumulation of legacy P following application of different manure types (e.g., beef and dairy cattle, swine) and on soils with contrasting physicochemical properties.