Increased horse numbers and insufficient acreage limit the ability for on-farm use of horse manure. Nearly 58% of surveyed farmers in NJ indicate that some manure was disposed off-farm while only 54% spread any manure on the farm (Westendorf et al., 2010). Analysis of manure by Near-Infrared Reflectance Spectroscopy (NIRS) could be a useful means of determining nutrient and energy content without time consuming efforts of wet chemistry and other laboratory analyses if horse manure is used as a fertilizer or energy source. The NIRS analysis works by subjecting samples to a concentrated light of a known spectrum and measuring the absorbance of the reflected beam (Dyer and Feng, 1997). Covalent chemical bonds of the common organic elements (Carbon, Nitrogen, Oxygen and Hydrogen) have strong absorbance in the NIRS region, useful because there is a correlation between absorbance and concentration (Malley et al., 2002). By comparing data between samples generated by NIRS to laboratory analysis of the same samples, NIRS equipment can be calibrated for practical use. The objectives of this project were: 1) determine the nutrient content and value of horse manure, and make NIRS calibrations based on previously determined wet chemistry values, and 2) determine if ash or Neutral Detergent Fiber (NDF) content can be used to predict Gross Energy (GE) levels.

Horse manure consisting of 123 solid dry stack manure samples, were collected from 30 NJ farms over four seasons during a 12-month period in 2008-2009. Samples were collected from various random locations in a manure pile in ~ 4 l sealable plastic bags, frozen, and stored until analysis. All samples were dried at 55o C to a constant weight in a Thermocore® oven. Following drying, all samples were ground to a particle size of 5-10 mm in a Waring® industrial blender, referred to as Coarse ground samples. Samples were sent to DairyOne Laboratories in Ithaca, NY and analyzed for manure components (Total-N, P2O5, K2O, NDF, and GE); samples were analyzed for Ash by the Rutgers University Soil Testing Laboratory. Coarse ground samples were further ground in a coffee grinder to a particle size between 2-3 mm (these samples are referred to as Fine ground samples). All NIRS analysis of Coarse and Fine ground samples were made with a Unit y Scientific Spectrastar ™ 2400 Drawer model (Brookfield, CT). Samples were scanned at 1nm intervals over the wavelength range of 1250-2350 nm, as prescribed by Unity Scientific. Data from the DairyOne Laboratory results were used as reference values to develop calibrations using the Ucal™ software package (Unity Scientific, Brookfield, CT) set at default values using a partial linear squares statistical model. 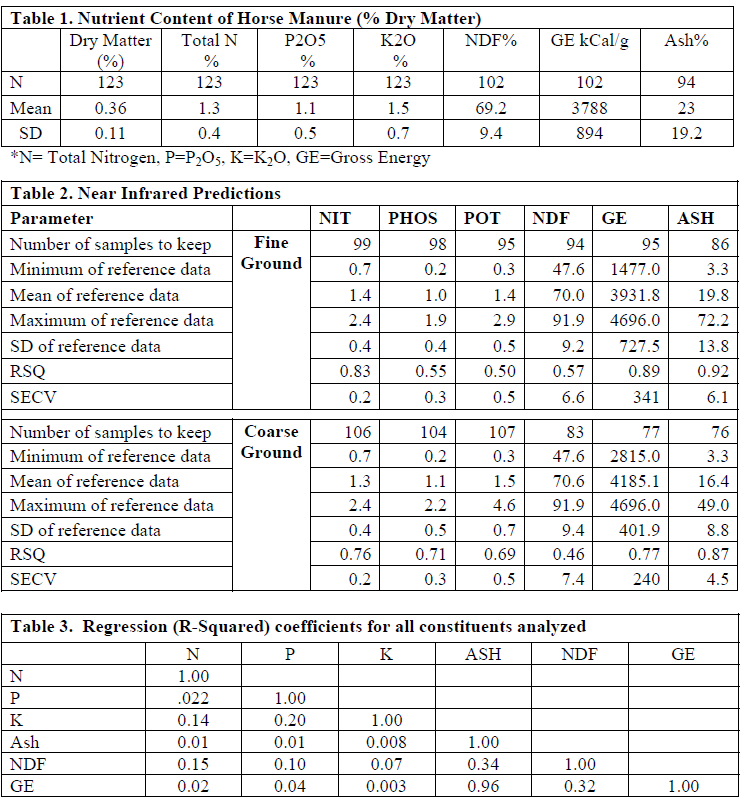 This research suggests that NIRS can be useful for predicting nutrient content of horse manure and that Ash is a good predictor of energy content. A comparative field trial on horse farms is planned for follow-up.


How Can Thermo-Chemical Technologies Assist in Nutrient Management?

Livestock operations continue to expand and concentrate in certain parts of the country. This has created regional “hot spot” areas in which excess nutrients, particularly phosphorus, are produced. This nutrient issue has resulted in water quality concerns across the country and even lead to the necessity of a “watershed diet” for the Chesapeake Bay Watershed. To help address this nutrient concern some livestock producers are looking to manure gasification and other thermo-chemical processes. There are several thermo-chemical conversion configurations, and the one chosen for a particular livestock operation is dependent on the desired application and final by-products. Through these thermo-chemical processes manure 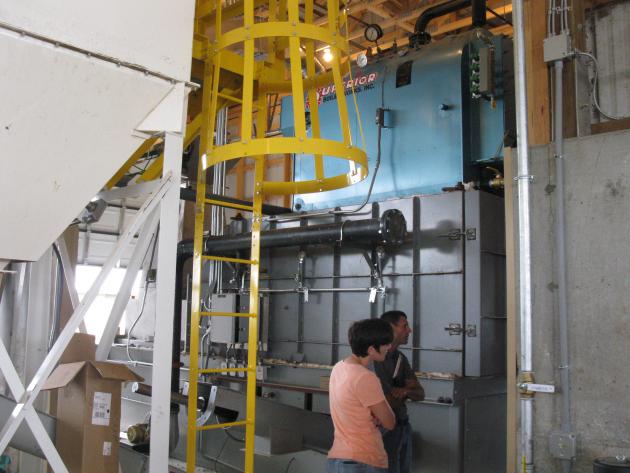 volumes are significantly reduced. With the nutrients being concentrated, they are more easily handled and can be transported from areas of high nutrient loads to regions of low nutrient loads at a lower cost. This practice can also help to reduce the on-farm energy costs by providing supplemental energy and/or heat. Additional benefits include pathogen destruction and odor reduction. This presentation will provide an overview of several Conservation Innovation Grants (CIG) and other manure thermo-chemical conversion projects that are being demonstrated and/or in commercial operation. Information will cover nutrient fate, emission studies, by-product applications along with some of the positives and negatives related to thermo-chemical conversion systems. 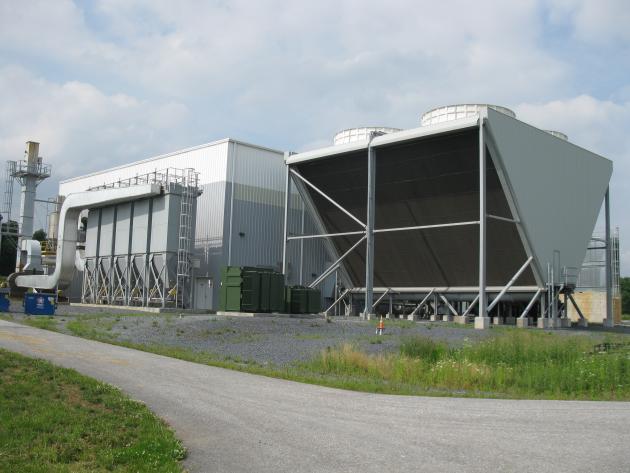 Several farm-scale manure-to-energy demonstration projects are underway within the Chesapeake Bay Watershed. Many of these receive funding through the USDA-NRCS Conservation Innovation Grant program. These projects, located on poultry farms, are being evaluated for the performance of on-farm thermal conversion technologies. Monitoring data is being collected for each project which includes: technical performance, operation and maintenance, air emissions, and by-product uses and potential markets. Performance of manure gasification systems for non-poultry operations have also been reviewed and evaluated. A clearinghouse website for thermal manure-to-energy processes has been developed. 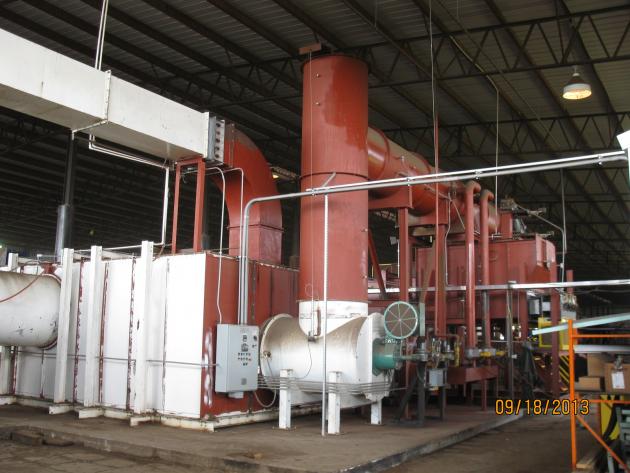 The projects have shown that poultry litter can be used as a fuel source, but operation and maintenance issues can impact the performance and longevity of a thermal conversion system. These systems are still in the early stages of commercialization and modifications are likely as lessons are learned. Preliminary air emission data shows that most of the nitrogen in the poultry litter is converted to a non-reactive form. The other primary nutrients, phosphorus and potassium, are preserved in the ash or biochar co-products. Plant availability of nutrients in the ash or biochar varies between the different thermal conversion processes and ranges from 80 to 100 percent. The significant volume reduction and nutrient concentration show that thermal conversion processes can be effective in reducing water quality issues by lowering transportation and land application costs of excess manure phosphorus.

Monitoring will continue for the existing demonstration projects. Based on the lessons learned, additional demonstration sites will be pursued. As more manure-to-energy systems come on-line the clearinghouse will be updated. Based on data collected, NRCS conservation practice standards will be generated or updated as necessary. 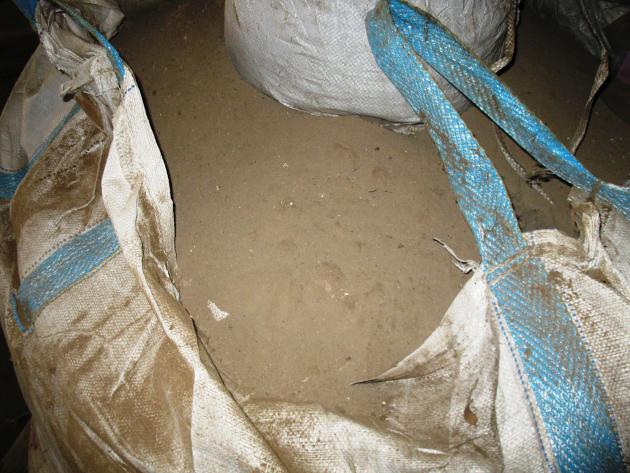 Currently, all the Bay states are working to achieve nutrient reduction goals from various pollution sources.  Significant reductions in phosphorus pollution from agriculture, particularly with respect to phosphorus losses from land application of manure are needed to support a healthy aquatic ecosystem.  Producers in high-density animal agricultural production areas such as Lancaster County region of Pennsylvania, the Delmarva Peninsula, and the Shenandoah Valley region of Virginia, need viable alternatives to local land application in order to meet nutrient reduction goals.

Field demonstrations will be monitored to determine whether the technologies are environmental beneficial, and economically and technically feasible. Specific measures of performance include: reliability and heat distribution, in-house air quality, avoided propane or electricity use, costs to install and maintain, fertilizer and economic value of ash or biochar produced, air emissions, and fate of poultry litter nutrients. Technology evaluation results will be shared on a clearinghouse website developed in partnership with eXtension.

The Farm Manure to Energy Initiative is a collaborative effort to evaluate the technical, environmental, and economic feasibility of farm-scale manure to energy technologies in an effort to expand management and revenue-generating opportunities for excess manure nutrients in concentrated animal production regions of the Chesapeake Bay watershed.

The project team went through a comprehensive review process and identified three farm-scale, manure to energy technologies that we think have the potential to generate new revenue streams and provide alternatives to local land application of excess manure nutrients.  Installation and performance evaluation of two of these technologies on four host farms in the Chesapeake Bay region are underway. Partners have also completed a survey of financing options for farm-scale technology deployment and published a comprehensive financing resources guide for farmers in the Chesapeake Bay region.

To date, we have not identified any manure to energy technologies that also provide alternatives to local land application of excess manure nutrients for liquid manures.  Thermochemical manure to energy technologies using poultry litter as a fuel source seem to show the most promise for offering opportunities to export excess nutrients from phosphorus hotspots in the Chesapeake Bay region. Producing heat for poultry houses is the most readily available energy capture option.  We did not identify any vendors with a proven approach to producing electricity via farm-scale, thermochemical manure to energy technologies. With respect to the fate of poultry litter nutrients, preliminary air emissions data indicates that most poultry litter nitrogen (greater than 98%) is converted to non-reactive nitrogen in the thermochemical process. Phosphorus and potash are preserved in the ash or biochar coproducts. Preliminary field trial results indicate that phosphorus in ash and biochar is bioavailable and can be used as a replacement for commercial phosphorus fertilizer, but bioavailability varied according to the thermochemical process.

We are currenty in the process of installing and measuring the performance of farm-scale demonstrations in the Chesapeake Bay region.  We are collaborating with the Livestock and Poultry Environmental Learning Center to develop a clearinghouse website for thermochemical farm-scale manure to energy technologies that will be hosted on the eXtension website.  Performance data from our projects will be shared on this website, which can also be used as a platform to share information about the performance of other farm-scale, thermochemical technology installations around the U.S. Technical training events using farm demonstrations as an educational platform will be hosted during the later half of the project. Additional field and row crop trials to demonstrate the fertilizer value of the concentrated nutrient coproducts are also planned using ash from farm demonstrations.

Funding for this project is provided by a grant from the USDA Conservation Innovation Grant program, the National Fish and Wildlife Foundation via the U.S. EPA Innovative Nutrient and Sediment Reduction Program, the Chesapeake Bay Funders Network, as well as technology vendors and host farmers participating in the technology demonstrations.