As anyone that has evaluated potential sites for swine facilities knows, many factors–such as wind speed, direction, topography, vegetation, and more–influence the potential impacts on downwind neighbors. In an effort to understand how air currents interact with the building site–and therefore pick up odors, dust, and other emissions–Tom Sauer and Jerry Hatfield, with the National Soil Tilth Laboratory in Ames, Iowa, built a model swine farm in a wind tunnel.

Air flow velocities and turbulence intensities were measured with a sensor that measured how quickly the winds carried heat away at 83 points behind the building models. They also took pictures of smoke patterns, generated by dry ice, to capture airflow patterns around the model structures and measured evaporation rates from the model storage tanks and lagoons. They reconfigured the model farm in different ways and repeated their measurements.

What Did They Learn?

Buildings situated perpendicular to airflow disrupted downwind airflow to a greater extent than buildings parallel to airflow. “These studies show how much the placement of animal housing units and manure-storage facilities can work in combination with prevailing winds and site conditions to affect the distance that potential agricultural air emissions can travel,” says Sauer. “They strongly indicate that we should be able to reduce the downwind air-quality impacts from animal production by modifying the layout of a production facility.” 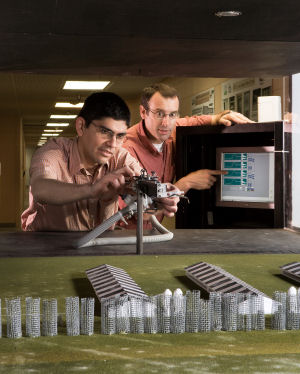 This summary was adapated from materials provided by the USDA ARS. It has not been peer reviewed and represents the newsletter editor’s summary of the research.