Ammonia and carbon dioxide are two major air pollutants at commercial laying hen houses. Ammonia models are widely used to estimate emissions from individual farms, a region, a country, or the world and assess their potential environmental and ecological impacts. Carbon dioxide models have been used to estimate ventilation rates based on mass balance. Reliable models must be developed based on measurement data from field conditions. However, concentrations and emissions of these two gases vary temporally in layer houses and can affect accuracies of measurement data and emission models. Accuracies of the measurement results are largely affected by instruments and methodologies, which includes sampling timing, i.e., number of samples per day (NSPD) and sampling starting time. The purpose of this study is to demonstrate the impact of measurement timing on ammonia and carbon dioxide concentrations and emissions.

A dataset of measured gas concentrations and emissions at a commercial laying hen farm was selected and used as a reference. It contains 5 days of continuous measurement data that were saved every minute. Different sampling timing scenarios were selected based on a literature survey and were applied in a computer simulation. Absolute differences in percentage between the simulation results and the reference were used to assess the effects of sampling timing.

Scenario (b) simulation revealed a new finding that sampling starting times had large impacts on data accuracies as well (Figure 2). The absolute differences 1. ranged from 0.00 % (for both ammonia and carbon dioxide concentrations at 144 NSPD) to 12.92% (ammonia concentrations at 2 NSPD); and 2. was 7.43% for ammonia emissions at 1 NSPD and 7.60% for carbon dioxide emissions at 2 NSPD, both were the largest emission differences. Additionally, scenario (b) demonstrated the same effects as points 3 and 4 in scenario (a).

More research on the effects of sampling timing on gas concentration and emission measurements will be conducted using datasets of longer-term field measurement (> 1 year) with other sampling scenarios based on the literature survey.

This work was supported by the USDA National Institute of Food and Agriculture Hatch project 7000907.

The authors are solely responsible for the content of these proceedings. The technical information does not necessarily reflect the official position of the sponsoring agencies or institutions represented by planning committee members, and inclusion and distribution herein does not constitute an endorsement of views expressed by the same. Printed materials included herein are not refereed publications. Citations should appear as follows. EXAMPLE: Authors. 2022. Title of presentation. Waste to Worth. Oregon, OH. April 18-22, 2022. URL of this page. Accessed on: today’s date.

The use of gas-permeable membranes in wastewater treatment and resource recovery has become an increasingly prevalent research topic. Many of the membranes used for such purposes are expanded PTFE (ePTFE or Teflon), but the specifications, characteristics, and performance under certain conditions of these materials vary widely. In spite of these property differences, we found no documented process or suggested membrane specifications by which one membrane product can be selected over another for a given removal or recovery goal in wastewater. Research we reviewed in this area mostly describe examples of different applications.

Collection of ammonia from waste streams, especially with high concentrations such as animal manures, offers several benefits such as reduction of air pollution precursors, prevention of water pollution, and transformation into higher-value products.

Tests were selected to evaluate the performance and durability of four different hydrophobic, gas-permeable membranes specific to the application under consideration—ammonia recovery from wastewater—but can be used with slight modification for testing recovery of other compounds of interest.

The four Teflon membranes selected differed in material density and wall thicknesses, specifications important for variability in handling, durability, and mass transfer (HDKW: high density, thick wall; LDKW: low density, thick wall; LDNW: low density, thin wall; HDNW: high density, thin wall). Membrane specifications and properties are provided in Table 1. The different membranes were examined in this study spanned across several trials. Experimentation reared data on different membranes’ weep pressure, as well as the airflow rate through the membranes as a function of applied pressure to the membrane. Data were also collected on the rate of transfer of ammonia from the gas phase across the membrane into the aqueous phase over a 24-hour period.

The weep pressure is that pressure at which the membrane loses its hydrophobicity and allows liquid to pass. Results are used to estimate the maximum differential pressure the membrane can withstand without compromising membrane integrity. This test of each membrane material was completed in triplicate using prepared sections of each of the four membrane materials. Membranes were first soaked in 0.1 mM sulfuric acid for 24 hours. A section of each membrane material was connected at the end of a column of vinyl tubing and filled with the 0.1 mM H2SO4 solution at a pressure of 0.5 PSI. Pressure was increased by 0.5 psi increments every 24 hours by applying air pressure through a manifold. Pressure was increased until a drop of liquid was found weeping from one or more of the membranes.

We determined the resistance to airflow through each membrane as an indication of the relative resistance of the various membranes to mass transfer of gas molecules of interest. A section of each of the four materials were connected to a compressed air source through a flow meter and pressure gauge. The pressure was recorded as the airflow rate was increased incrementally to 25 PSI, well past the maximum weeping pressure, or until the flow rate seemed to taper off. The procedure was repeated three times using the same section of each membrane material. The results are shown in Figure 1. 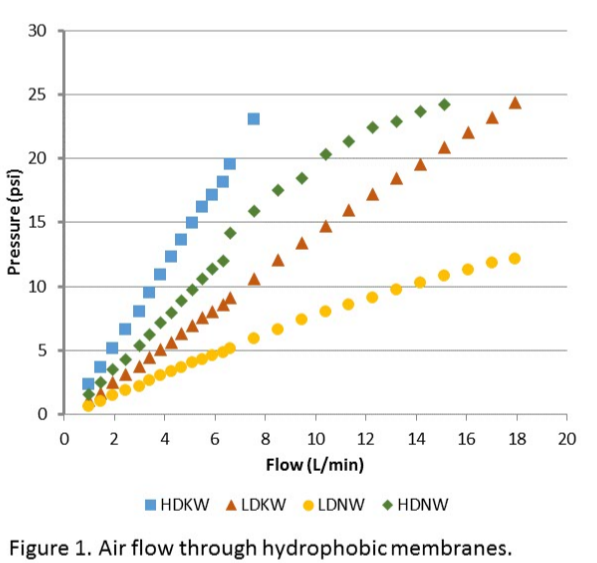 A final test was conducted to estimate if the differences in membrane composition and performance of earlier tests impact the mass transfer of the gas of interest across the membrane. A single section of each of the four membrane materials was installed through bulkhead fittings as shown in Figure 2 into a chamber such that deionized (DI) water could be circulated through each individual membrane while all four membranes were exposed to the same NH3 concentration inside the chamber. NH4Cl was combined with NaOH inside the chamber to produce NH3 gas. 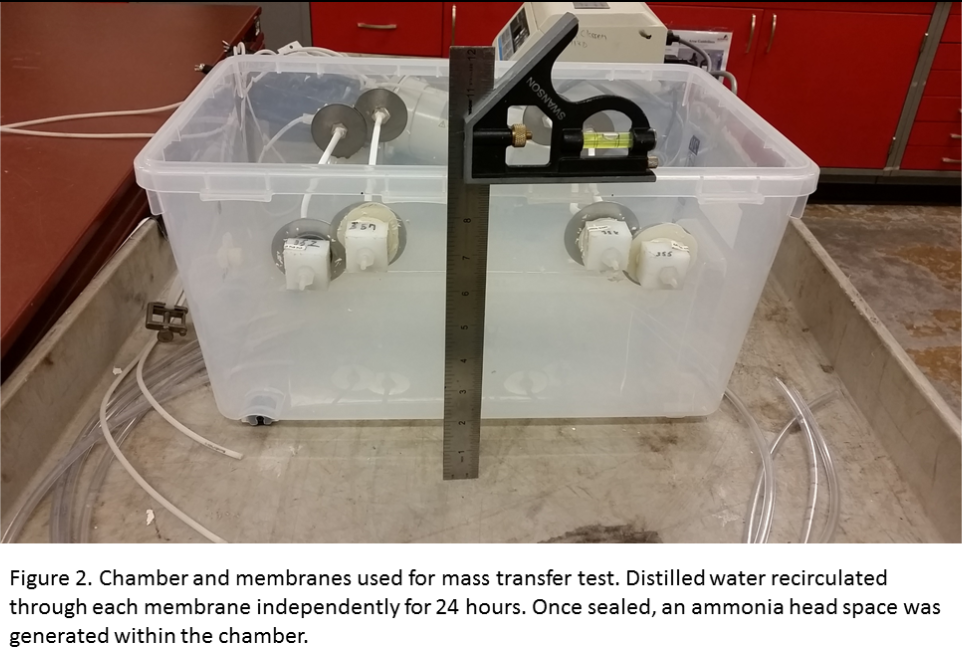 The results of the mass transfer experiments revealed there are only small differences in ammonia transfer rates among the different membranes, leaving the membrane selection to rely on other results. The weep pressure of the low density membranes was lower than that of the high density membranes but was sufficient to avoid backwards movement of the two fluid phases. The higher airflow rate and lower pressure of the low density thin walled material was the determining factor in selecting this membrane. From these tests, this membrane will survive handling and installation and will provide little resistance to ammonia transfer from wastewater.

The experiments and conclusions involved in this study are some of the first of their kind for this application, therefore leaving much research to still be done surrounding membrane selection for other material recovery processes. Data gathered in this particular study can serve as a guideline for further research pertaining to optimal membrane characteristics for the recovery of target products from effluent.

Funding for this project was provided by NRCS CIG Award Number 69-3A75-12-183. The authors are grateful for the analytical work of the BAE Environmental Analysis Laboratory, Dr. Cong Tu, manager.