Germs are everywhere, some resistant to medical treatment

When I was a kid, I remember being called inside for lunch on a summer day and hearing, “Wash your hands! You’ve been playing in the dirt!” Of course, we all grew up knowing that dirty hands can spread germs. But, I didn’t know until I was much older that the same soil that made my hands dirty was also the source of some pretty amazing medicines.

Many widely used antibiotics were first discovered in soil. Penicillin, one of the first antibiotics used to treat infections in humans, was isolated from a mold called Penicillium notatum growing in soil. Vancomycin, discovered in a soil  sample from deep within the jungles of Borneo, is produced by a species of soil bacteria from the Actinobacteria phylum. And, chlortetracycline is an antibiotic produced by actinomycete, another type of bacteria found in soil. It may not be surprising that soil is home to such a vast array of microorganisms, but why do so many types of soil bacteria create antibiotic compounds? 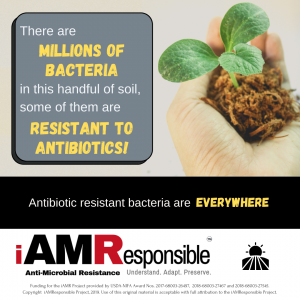 The idea that all living things must adapt to their changing environment to preserve their species is often referred to as “survival of the fittest”. In a world of limited resources – including the soil environment – surviving means competing with other organisms for the necessary inputs, like nutrients, water, and oxygen, to stay alive. One way to ensure access to the resources needed is to eliminate the competition. For this reason, fungi and bacteria in soil may produce compounds that kill bacteria, a sort of “chemical warfare” at the microscopic level. Thankfully, scientists discovered many years ago that these antibiotic compounds made by organisms to fight off their competition in the soil environment can also fight off bacterial infections in the bodies of humans and animals. 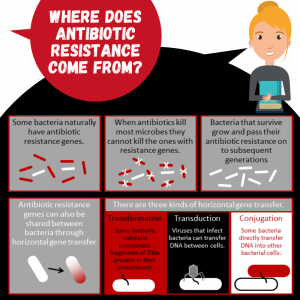 Bacteria and other organisms, however, seldom go down without a fight. The bacterial targets of antibiotics fight back in an attempt to survive when they encounter these toxins, whether inside a human body, an animal, the soil, or any other environment. While an antibiotic may eliminate most of the target bacteria, some may survive because they have a trait that makes them less susceptible to the toxin or because the toxin is not delivered in a large enough quantity to kill all of its targets. “What doesn’t kill us makes us stronger” is certainly true for many of these bacteria. The surviving members of the bacterial population begin preparing for the next attack of that toxin by changing at a genetic level (altering their genes), transferring to their fellow bacterial neighbors the genetic material (genes) that enabled them to resist the initial attack and even receiving genetic material from viruses that infect them. The bacteria are developing “antibiotic resistance”. These processes are a natural part of a bacterium’s life cycle, and the new traits developed to resist the toxin are passed on to some of their offspring to help ensure the survival of their species.

What can we do about antibiotic resistance?

So, does this mean nature alone is to blame for the worldwide threat to human health by antimicrobial-resistant bacteria? Certainly not. But, it does mean that human development and the use of antibiotics for the treatment of bacterial infections did not create the phenomenon of antibiotic resistance. Antimicrobial-resistant traits among bacteria were present in nature long before the modern antibiotic era. Scientists studying the evolution of various antibiotics have discovered that some enzymes responsible for equipping bacteria to resist some antibiotics originated millions, or even billions, of years ago. Multi-drug-resistant bacterial isolates have been identified in environments unaffected by antibiotics, such as remote, undisturbed soils and pristine freshwater environments.

So, what does this all mean? I hate as much as the next person to hear the words, “it’s complicated”, when trying to make sense of something that is beyond my immediate understanding. But, the truth is, the historic and future evolution of antimicrobial resistance is complicated. As of yet, scientists have not established a simple “cause and effect” scenario for how and why drug-resistant strains of bacterial infections occur. We often hear people blame the “overuse and misuse” of antibiotics in humans and animals for the development of antibiotic resistance. Using the soil environment as an example, it is easy to see that any exposure to antibiotics can trigger bacterial species to begin developing resistance mechanisms. That is not to say that more prudent use of antibiotics in human and animal populations is not a critical component of the global battle against antimicrobial resistance health concerns. It simply means that human and animal health care practices are only one piece of a large and diverse puzzle for which we do not yet know how to fit all of the pieces together.

Unfortunately, antimicrobial resistance is complicated. But, while we have not yet “solved” the crisis of treatment failure for antimicrobial-resistant infections in the human clinical setting, we are learning more and more every day about how the environment, human medicine, livestock, and domestic animal health care, policy, and food production and handling practices influence the future of this health threat. And, we believe everyone has an obligation to develop an understanding of antimicrobial resistance – what it is, how it happens, and what risks may exist for us individually and collectively – and to adapt our individual practices based on scientific evidence to reduce AMR-related health risks. Simply put, we all have a role.

The problem of antibiotic resistance is real, and it is growing into one of the most significant health crises the world may ever see. However, responsibilities for creating and solving the crisis are quite broad, and some contribution comes from natural forces in the world totally unrelated to human activity. Understanding this will be important in identifying solutions to correctly address the problem.