Microorganisms (e.g. virus, bacteria, protozoa, and fungi) surround us, on us, and in us; they are ubiquitous and everything in the world is governed by them.  They are part of our everyday lives.  They influence the the quality of our soil, food grown on that soil, and how our body reacts to that food. They are diverse, ranging from a simple mix of protein and DNA to complex multi-cellular  small “animals”.  Most environmental microorganisms spend their entire lives as quiet members of their ecological society, but some reach a level of infamy.  Pathogens may only represent a very small portion of all microorganisms, but they are often the most visible, thanks to readily reported outbreaks, food recalls, and proliferation of internet news blogs and sites.

What is a Pathogen?

A pathogen is a biological agent that causes disease or illness; this disease can occur in humans, animals, or crops. Zoonotic pathogens refers to pathogens naturally transmitted from animals to humans and are often heard about on news sites or involved in food recalls.

All animals including pets, livestock, wildlife and humans, are possible hosts of potential human pathogens. We will focus on pathogens originating from livestock and poultry that might be transported to humans via air, water, soil, crop, and fomites (inanimate objects) contacted directly or indirectly by manure.

There are four general classes of zoonotic pathogens:

Zoonotic viruses are those found mainly in animals that cause disease in people who come into contact with the animal or share a vector (transmitter of disease) like a mosquito (West Nile Virus is a virus of birds which mosquitoes carry and can transmit to people). Viruses can only multiply when they are inside a host cell.

Zoonotic bacterial pathogens are, like all bacteria, single celled microorganisms that can survive and, under favorable conditions, reproduce in terrestrial and aquatic environments. The zoonotic bacteria are those that typically cycle in domestic animals without causing disease in their typical hosts. However, when they get transmitted into people, the disease that is produced can be severe.

Zoonotic protozoan parasites, are protozoa that are found in other animals and which can infect people. There are basically two roles that humans can play in this scenario. They can be accidental hosts in the life cycle of the protozoan, where the protozoan undergoes the same development in the human as it does in its normal reservoir host. Or, the human may be an intermediate host in the life cycle of the parasites, just like any other vertebrate; in this case, the reservoir host shed many stages into the environment with the goal of infecting as many intermediate hosts as possible.

Zoonotic helminth parasites are worms, nematodes (roundworms), cestodes (tapeworms), or trematodes (flukes), that have cycles similar to protozoa. Again, people can be infected accidentally by the worm in the same manner as a reservoir host or they can be serving as just another vertebrate intermediate host in the life cycle of the parasite. 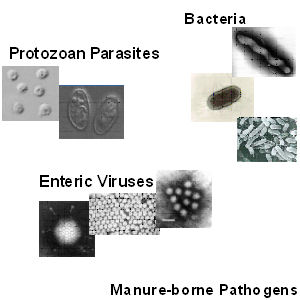 Detailed discussion of protozoan parasites, bacteria, and viruses can be found on pages 5, 12, and 18, respectively, of the USDA NRCS technical note

These outbreaks were indicative of the capability of the pathogens to survive and be leached through soil to groundwater sources of drinking water. 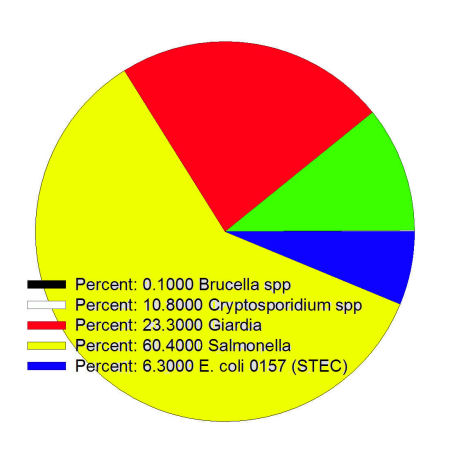 Not all illness outbreaks are livestock related. For example, animal manure was initially suggested as the source of the largest drinking water outbreak in U.S. history – the Cryptosporidium outbreak in Milwaukee, WI in 1993. Several years later following advances in microbiology and genetics, human sewage was identified as the likely contributor.

A listing of possible zoonotic pathogens can be found on pages 6 – 10 of an EPA literature review.