Generation, Fate, and Transport of Bioaerosols

Commercial livestock are often reservoirs of zoonotic pathogens (temporarily or permanently), which can be transmitted to the environment in untreated manures. An area of growing interest is airborne pathogens (Table 1) and microbial byproducts (e.g. endotoxins, mycotoxins) generated at confined animal feeding operations (CAFOs) and during the land application of liquid and solid manures, which can affect the health of livestock, farm workers, and individuals in nearby residences. Bioaerosols are defined as viable or nonviable biological particles, such as bacteria, virus, and fungal spores and their fragments and byproducts that are suspended in the air.

Application methods (Figure 1) that launch manures into the air create a potentially hazardous situation as pathogens are aerosolized and transported to downwind receptors.  Aerosolized pathogens may be inhaled or ingested after they land on fomites, water sources, or food crops. Manures with a low moisture content (e.g. chicken litter,  dewatered feces) are generally land-applied using a manure slinger or spreader. Wastes that have a very low solids content, such as wastewater from flush systems, holding ponds, or lagoons are land applied via furrow irrigation, directly injected (e.g. drag-hose), or sprayed using a tanker or pressurized irrigation systems (e.g. spray gun, center-pivot).

Aerosolization is a process where fine droplets evaporate completely or to near dryness and microorganisms in these droplets are transformed into solid or semi-solid particles (i.e. bioaerosols). During spray irrigation events of liquid manures and wastewaters, the water stream is broken up into droplets of various sizes. The size of the droplets is related to the sprinkler head configuration and operating pressure of the irrigation system.  Aside from spray irrigation events, bioaerosols generated directly from relatively dry surfaces (e.g. feedlots) and spreading of manure solids can be released as individual or groups of cells or associated with inorganic or organic particular matter.

Airborne microorganisms and their byproducts are generated as a mixture of droplets or particles with aerodynamic diameters ranging from 0.5 to 100 µm.  Aerosol particles 1 to 5 µm in diameter are of the greatest concern because they are readily inhaled or swallowed, but the greatest retention in the lung alveoli occurs with the 1- to 2-µm particles.

Airborne microorganisms associated with particles or droplets that evaporate to near-dryness before impacting the ground or vegetation are transported in air currents. When bioaerosols are released from a source, they can be transported short or long distances and are eventually deposited in terrestrial and aquatic environments. The transport, behavior, and deposition of bioaerosols are affected by their physical properties (i.e., size, shape, and density) and meteorological factors they encounter while airborne.

Assessment of bioaerosol transport is generally accomplished by setting liquid impingement or solid impaction systems (Figure 2) at an upwind location (background) and various downwind distances from the source. Samples are then analyzed via culture-dependent or molecular-based (e.g. PCR) assays or microscopically to calculate a microorganism concentration per cubic meter of air. 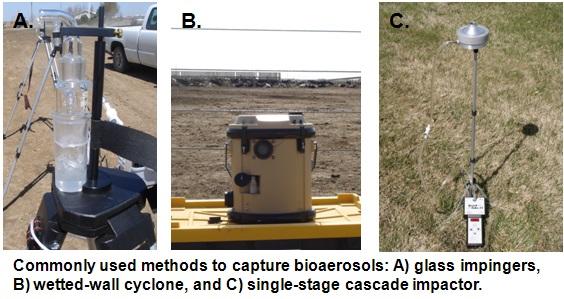 With most bioaerosol studies, whether conducted at CAFOs, composting facilities, or manure application and wastewater spray irrigations sites, the general trend observed is that the airborne microorganism concentrations decrease with distance from the source. The concentration decrease can be attributed to diffusion, gravitational settling, surface impaction, and loss of viability of the bioaerosols.  Unlike microorganisms in soil, water, and manure, aerosolized or airborne microorganisms are very susceptible to a variety of meteorological factors. The most significant factors that affect viability are relative humidity, temperature, and solar irradiance. In general, laboratory and field studies have shown that microorganism viability decreases with decreases in relative humidity and increases in temperature and solar irradiance.

For more details on this topic, please refer to the following publications: