About the Participating Farms

Thirteen pork production facilities in Indiana, Iowa, and Nebraska were engaged in defining their whole farm nutrient balance (WFNB) for two one-year periods (2006 and 2007). The average balance observed for these farms is reported in Figure 1 with the results of individual farms summarized in Appendix A (2006) and B (2007). These farms ranged in size from 2,000 to 16,000 head finishing capacity with most farms being wean to finish or feeder pig to finish. Two farms included sow facilities. Most farms included a crop production component ranging from 0 to more than 2000 acres. All but two farms were operated by individual families. Eight farms operated a contract swine operation, four were independent and one was an integrated operation.

Information was collected and analyzed independently for 2006 and 2007. While information was shared with producers at the end of 2006, no effort was made to encourage farm management or practice changes by the participating farms. Procedures used for collecting data in 2006 were discussed with farms at the end of 2006 and, if appropriate, modified procedures were implemented in 2007 for data collection only. In all cases, those modified procedures were also applied to the 2006 results.

On average, 1.5 lbs of nitrogen entered these 13 farms from off-farm sources (Inputs – see green arrow in Figure 1) for every 1 lb of nitrogen leaving as Managed Outputs (see yellow arrow in Figure 1). This ratio ranged from 1.1 to 2.5 lbs input per 1lb managed outputs. Feed was the single largest source of inputs on average (79% of all inputs) followed by fertilizer (11%). Animals, legume fixed nitrogen, and nitrates in irrigation water accounted for the remaining 10%. 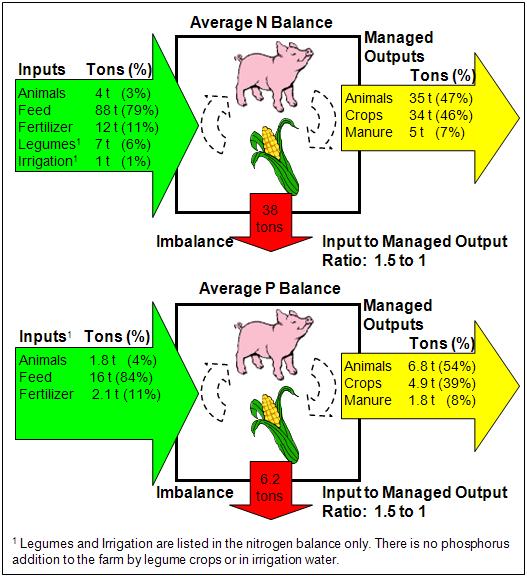 The results also suggest that some additional factors will influence WFNB and the resulting accumulation of and loses from farms:

Finally the results provide insights that the following factors have little or no influence on WFNB and the resulting accumulation of and losses from farms:

Comparison to Other Species

The WFNB has been applied primarily to dairy farms in previous research. Spears et al. (2003) conducted whole-farm nitrogen balances on 41 Western dairy farms. On average 2.8 lbs of Nitrogen entered the farm for every pound leaving as a managed output. Castillo et al. (2000) estimated whole-farm nitrogen balances from European dairy farms to range from 1.2 – 2.3 to 1. Studies conducted prior to most nutrient management planning efforts also revealed relatively high whole farm imbalances. Fox (et al, 1994) reported whole farm balances for five dairies that ranged from 2.6 – 4.2 to1 (nitrogen) and 2.4 – 4 to 1 (phosphorus). Koelsch (2005) reviewed whole farm nutrient balances on 33 beef finishing and swine farms from 1996. Nitrogen balance ranged from 0.8 – 4.0 to 1 and phosphorus balance from 0.5 – 4.8 to 1.

WFNB values observed in previous research was significantly higher than observed with the 13 swine farms. This may be explained in part by the degree of implementation of nutrient plans, the utilization of feeding technologies such as the use of dietary phytase, and the degree of integration of animal and crop production into the same farm. In general, the results of the swine operations that participated in this study suggest significantly better nutrient management over previous studies.

This project was funded by The National Pork Board Project