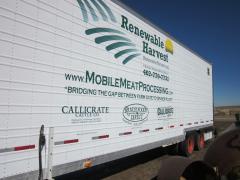 Over the last decade, while demand for local meats appeared to be increasing, small farmers and ranchers in Nebraska were having difficulty finding small meat processors. The Nebraska Environmental Action Coalition (NEAC), a local affiliate of the Socially Responsible Agriculture Project (SRAP), wanted to help. In 2009, after consulting with farmers, local retailers, and others, NEAC decided to build a USDA-inspected MSU; SRAP dedicated $200,000. Once it was built, they planned to find someone to lease and use it commercially.

Laura Krebsbach, the NEAC/SRAP organizer who led the project, knew that building the actual unit was only one part of the project: any prospective MSU operator needed help navigating a host of other issues, from HACCP to local zoning. Her team developed the relevant expertise: design and construction, regulatory and legal issues including HACCP, and water management systems. They organized as a new non-profit, 501c3 organization called Renewable Harvest. Their mission is “to help rural communities build their local production, marketing, and processing capabilities …  by providing consulting services, and realistic and affordable solutions such as our Mobile Meat Processing Unit (MMPU).” 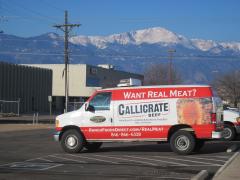 Shortly after construction began, Krebsbach met and partnered with Mike Callicrate, of Ranch Foods Direct, who was looking for other slaughter options. Renewable Harvest would own the unit, and Ranch Foods Direct would use it, paying the operational costs. If the MSU worked well, Callicrate would eventually build his own, and Krebsbach would make the MSU available as a teaching tool and business incubator for other producers.

The MSU cost $156,000 to build, which included $38,000 for a water system that has not worked as planned, as well as a generator that remains unused because the MSU can “plug in” at Callicrate’s ranch. In May 2011, they received their USDA grant of inspection, through the FSIS District Office in Lawrence, Kansas. The MSU is used at Callicrate’s ranch in St. Francis, KS, for Callicrate Beef cattle; carcasses are shipped to Ranch Foods Direct in Colorado Springs. The MSU is operated by two butchers and two helpers, who are otherwise employed by the ranch. 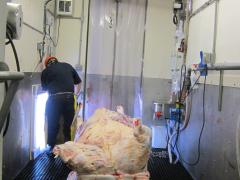 All water used on the MSU is pre-treated with ozone, as a food safety and sanitation measure. Offal is composted on site, and Callicrate and Krebsbach worked with the Kansas Department of Health and Environment to classify rinse water from an MSU as agricultural waste, not industrial waste as for most slaughter plants, allowing for on-site disposal. The MSU includes a reverse osmosis water purification system because the state of Nebraska would not allow on-site discharge of rinse water, and NEAC wanted to be able to use any water source, potable or not. However, it has not worked effectively, because it is too small to clean sufficiently even the relatively small amount of water used daily. This is currently not a concern, because the MSU is operating not in Nebraska but Kansas, which has decided to allow on-site discharge.

After nearly a year of experience operating the MSU, Mike Callicrate is ready to build his own. He has designed a three-part system, with a slaughter trailer, a separate reefer truck for chilling carcasses, and a transport trailer to carry the carcasses back to Ranch Foods Direct; he estimates harvest and chilling capacity at 50 head/day, though 25/day may be more realistic, at least at the start. He will install a hide puller on the slaughter trailer, to increase hide sale revenue. He is also considering “docking station” options, to limit what the MSU itself must carry. “We’ve got a rancher with good corrals, electricity, water, and a way to compost offal. If he sets up a docking station, the MSU can roll into his place and plug in.”

Renewable Harvest as an MSU Resource

While Callicrate uses the MSU, Krebsbach and Renewable Harvest are offering free consulting to livestock producers and others interested in MSUs. She and Callicrate have hosted tours and created a YouTube video tour.  The original MSU is available as a demo unit, which farmers can use on a trial basis.  If and when farmers are ready for their own, RH will build an MSU at cost, including HACCP plans and other regulatory assistance as needed. RH has ongoing support from SRAP and its funders to provide these services. As of this writing, groups in Hawaii, New York, and California are very interested in commissioning their own MSUs and are working on business plans.

Krebsbach knows that most people will never be ready for an MSU. “People call me all the time, wanting to buy one, but most of them don’t have all the pieces they need.” She requires three essentials: evidence of a real market for the meat; ownership of or guaranteed access to an inspected cut and wrap facility; and a specific person who is qualified and willing to operate the MSU. “If you don’t have those components, you will fail. We give people a major reality check.” Krebsbach is determined that the next MSU she builds will contribute to a successful meat company.