The purpose of this project was to demonstrate the effects of adding natural clinoptilolite zeolites to a dairy manure compost mix at the moment of initiating the composting process on ammonia emissions, nitrogen retention, composting performance, and characteristics of the final compost product. A typical dairy cow in the U.S. produces approximately 148 lb of manure daily (feces and urine, not counting bedding; Lorimor et al., 2000). This amounts to millions of tons of monthly manure production. On-farm composting of manure is one of the most-used practices to manage dairy manure in Idaho. Composting reduces manure volume between 35 and 50%, which allows the material to be significantly more affordable to transport than fresh, wet manure. Composting converts the nitrogen (N) present in the raw manure into a more stable form, which is released slowly over a period of years and thereby not totally lost to the environment. Composting contributes to alleviating problems associated with ground and surface water contamination and also reduces odor complaints (Rink et al., 1992; Fabian et al., 1993). During the manure handling and composting process, between 50 and 70% of the nitrogen can be lost as ammonia if additional techniques are not used to increase nitrogen retention. In most cases, manures from dairies and other livestock operations don’t have the proper carbon to nitrogen (C:N) ratio to be composted efficiently without added carbon (usual straw bedding has a C:N of 60 to 90). Dairy cow manure is rich in nitrogen (C:N ratios below 18:1), causing a great proportion of the available nitrogen to be lost as ammonia due to the lack of carbon to balance the composting process. The loss of nitrogen from manures as ammonia reduces the nutrient value of the manure, produces an inefficient composting process, and generates local and regional pollution. Lack of carbon also results in a lower-grade compost that can carry elevated concentrations of salts, potassium and phosphorous. In many arid zones there are not enough sources of carbon to balance the nitrogen present in the manure.

Zeolite is a mineral defined as a crystalline, hydrated aluminosilicate of alkali and alkaline earth cations having an infinite, open, three-dimensional structure. Zeolites are able to further lose or gain water reversibly and to exchange cations with and without crystal structure (Mumpton, 1999). Zeolites are mined in several western U.S. states where dairy production also is concentrated. This paper showcases a project that explored the effects of adding natural zeolites to dairy manure at the time of composting as a tool to reduce ammonia emissions and retain nitrogen in the final composted product.

This on-farm research and demonstration study was conducted at an open-lot dairy in southern Idaho with 100 milking Jersey cows. Manure stockpiled during the winter and piled after the corral’s cleaning was mixed with freshly collected manure from daily operations and straw from bedding and old straw bales, in similar proportions for each windrow. The compost mixture was calculated using a compost spreadsheet calculator (WSU-Puyallup Compost Mixture Calculator, version 1.1.; Puyallup, WA). Moisture was adjusted by adding well water to reach approximately 50% to 60% moisture on the initial mix. Windrows were mixed and mechanically turned using a tractor bucket. Three replications were made on control and treatment. The control consisted of the manure and straw mix as described. The treatment consisted of the same mix as the control, plus the addition of 8% of clinoptilolite zeolite by weight during the initial mix. Windrows were actively composted for four months or more. Ammonia emissions were measured using passive samplers (Ogawa & Co., Kobe, Japan) for the first five to seven days after building each windrow (called turn 1 in Figure 1) and after the two subsequent turns. Ammonia emissions per measurement period and per turn were obtained. Three periods of one to three days at the time of building each windrow and after the first turn were measured. After the second turn, two measurement periods of three to four days were made. Values of mg NH3-N/m3 are time-corrected by minutes of sampling (Figure 1). Complete initial manure (compost feedstock mix) and final screened compost nutrient lab analyses were performed for each windrow. Analyses of variance (ANOVA) on lab data and on ammonia samples were performed using SAS 9.4 (SAS Institute, Cary, NC).

The addition of 8% w/w natural zeolites to the dairy manure compost mix on a mechanically turned system using a tractor bucket reduced cumulative ammonia emissions by 11% during the first three turns (Figure 2) and showed a significant reduction trend in ammonia emissions. Figure 1 shows the differences and trend line in ammonia emissions per monitoring period and per turn. Treated windrows’ cumulative emissions were significantly lower (P<0.05) at 2.76 mg NH3-N/m3 from control windrows at 3.09 mg NH3-N/m3. Nitrates (NO3) on the composted treatment (702 ppm) were 3 times greater (p=0.05) than the control (223 ppm) (Figure 3). These results demonstrate that the addition of natural zeolites has a positive effect on reducing ammonia emissions during the composting process and increasing the conversion to nitrates, retaining nitrogen in the compost in a form that is more available to crops. 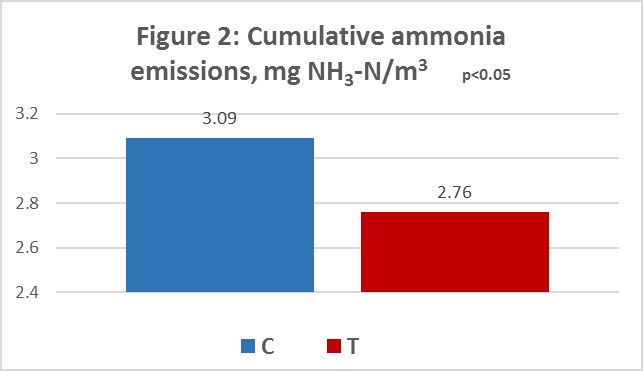 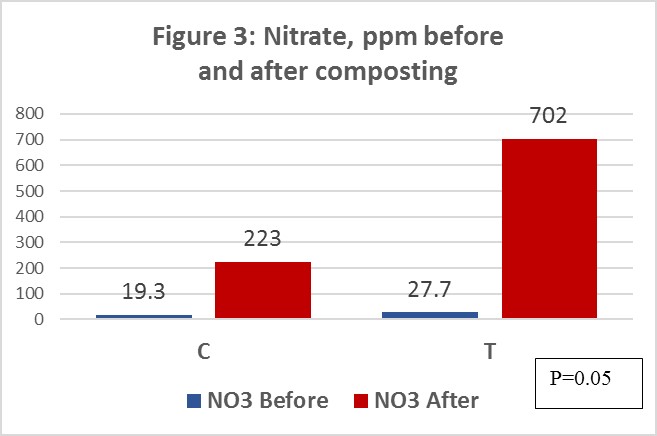 Field days and journal publications about this project are expected to occur within the next year.

This project was made possible through a USDA- ID NRCS Conservation Innovation Grants (CIG) # 68-0211-11-047. The authors also want to thank the involved dairy farmer and colleagues that helped during this Extension and research project. Thanks to Dr. April Leytem and her technicians at USDA-ARS in Kimberly, ID, for the loan of the Ogawa passive samplers and for sample analysis.