Animal manure can be used as a fertilizer, and it can improve soil quality. Manure can also be used as a feedstock for energy production. But excessive concentrations of manure, either in storage or in land application, can create environmental risks, and farmers are facing increased regulation of their manure management practices.

This web page summarizes the findings of an USDA Economic Research Service publication, Manure Use for Fertilizer and for Energy : June 2009 Report to Congress.

What Is the Issue with Animal Manure?

The Food, Conservation, and Energy Act of 2008 directed the Department of Agriculture (USDA) to prepare a study that would evaluate the role of animal manure as a source of fertilizer, and its other uses. The study was to provide: 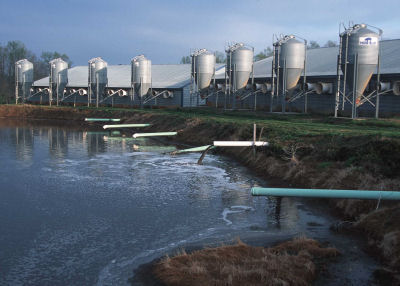 Livestock manure has value as a fertilizer and as an energy source. Photo courtesy USDA NRCS.

Animal manure is used as a crop fertilizer and soil amendment, but it can pose environmental risks when stockpiled or applied in excessive amounts. Federal, State, and local governments have responded to the environmental risks with regulations and conservation programs, and some State and local governments have also initiated lawsuits against livestock operations, claiming damages to water resources from manure. Efforts to comply with regulations impose costs on certain livestock operations and will likely lead to changes in manure use on those operations.

There is also increasing interest in using manure for energy production. Methane can be captured from the biogas in manure and burned for electricity generation, while manure can also be burned directly as a feedstock in combustion processes. This report assesses current patterns of use of manure as fertilizer and evaluates the likely impacts of emerging environmental regulations on manure use. The report also assesses current efforts to use manure for energy production and evaluates the impact of bioenergy investments on manure’s use as fertilizer.

What Did the Study Find?

About 15.8 million acres of cropland, equivalent to about 5 percent of all U.S. cropland, are fertilized with livestock manure. Corn, which is planted on about one-quarter of U.S. cropland, accounts for over half of the land receiving manure. Patterns of manure use are driven by the agronomic needs of crops and by transport costs, which limit the distance that manure can be moved and create close links between types of livestock and certain crop commodities. Each favors the application of manure to corn.

Most manure applied to corn comes from dairy and hog operations. Manure from poultry and cattle feedlot operations is drier and less costly to transport, and is therefore often removed from the farm and shipped to other operations. Because broiler production is concentrated in the southern United States, crops like peanuts and cotton rely heavily on broiler manure when they use manure fertilizers. 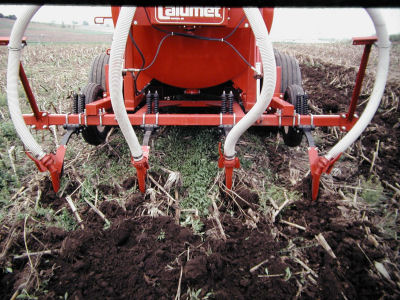 The value of nutrients in this manure will vary with supply and demand. Photo courtesy Rick Koelsch, University of Nebraska.

Large livestock operations are increasingly required to have nutrient management plans, which require balancing nutrient applications with the nutrient utilization of crops. Compliance with the plans can raise farm costs. Estimated costs vary sharply with the degree to which excess manure needs to be disposed of and the willingness of nearby farmers to accept manure for application to their cropland. A low willingness to accept among nearby farmers means that livestock producers will need to transport excess manure much farther for crop application. With a limited willingness to accept manure (defined as 20 percent of nearby farmers), we estimated that production costs, including those for manure management, would likely rise by 2.5-3.5 percent for large operations.

Such increases are unlikely to alter the emerging structure of livestock production, where large operations have substantial cost advantages over small operations. They are also unlikely to lead to substantial declines in production and consumption; the resulting percentage retail price changes would be less than the cost changes noted above because farm costs are only a fraction of retail costs, and retail demand for meat and milk is relatively insensitive to price changes. As a result, expanded regulation through nutrient management plans will likely lead to wider use of manure on cropland, at higher production costs, with little impact on the size structure of farming operations.

Manure-to-energy projects are not currently in widespread use. Digester systems, including those planned or in construction, cover less than 3 percent of dairy cows and less than 1 percent of hogs. The single operating combustion plant utilizes litter from 6.6 percent of U.S. turkey production, while an idled plant in California could utilize manure from about 3 percent of fed cattle. 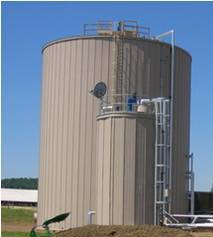 Manure-to-energy projects may allow farmers to realize benefits from avoided purchases of electricity, from selling electricity, or from selling manure to generating plants, but few realize enough savings to justify the expense. But because such projects use existing resources, they could provide society with benefits if manure replaces newly mined fossil fuels in energy production, and if methane, a greenhouse gas, can be captured. Those societal benefits have led to proposals to support manure-to-energy projects through State utility mandates (to purchase electricity from farms and to invest in renewable production sites), through subsidies for capital costs, and through direct subsidies and credits for energy production. Expanded support could lead to a substantial growth of energy applications for manure.

Currently envisioned manure-to-energy projects are not likely to impose substantive constraints on the use of manure as fertilizer. Many of the nutrients that are beneﬁcial to crop growth remain after energy production. Nitrogen, phosphorus, and potassium nutrients remain in the efﬂuent of the digester process, to be spread on ﬁelds. Combustion processes do consume the nitrogen nutrients in manure, but leave phosphorus and potassium in an ash residue that, because of its concentrated form, is less costly to transport than raw manure. In addition, manure-to-energy projects function in markets for fertilizer and energy, and will be most economic in those areas in which the acquisition costs of manure are lowest. In turn, manure acquisition costs will be lowest where manure is in excess supply, with the least value as fertilizer.

Additional Reading About Manure for Fertilizer and Energy