The  paper describes the laboratory and pilot studies of an autotrophic fixed film reactor, the rotating photo-bioreactor (RPB), that reclaims concentrated ammonia and phosphorus from anaerobic digestate.

Why Recover Nutrients from Anaerobic Digestion?

All of the nitrogen and phosphorus present in an anaerobic digester’s influent can be found in the effluent digestate. However, during the digestion process the organic nitrogen is by and large converted to ammonia, and the organic phosphorus converted to soluble orthophosphate. The ammonia and phosphorus are normally discharged to holding ponds prior to field application. The pH increases in the holding ponds due to the loss of CO2 resulting in a shift of the ammonium (NH4+) to toxic  ammonia gas (NH3) that is subsequently lost to the atmosphere. Upon land application additional ammonia losses occur and dissolved orthophosphate leached.

Anaerobic digestion does not recover the nutrients as often claimed. Some of the nutrients accompanied by pathogens, hormones, and antibiotics are land applied to improve agricultural yields. The remaining nutrients are lost to the environment. Methods to reclaim ammonia are limited to high temperature ammonia stripping, or ion exchange with acid stripping of NH3 to form dilute solutions of ammonium sulfate or ammonium nitrate. Those methods require chemical reactants and produce products having little economic value. Other options include recovery of a portion (< 15%) of the nitrogen and a majority of the orthophosphate found in digestate, with the addition of magnesium, as crystalline struvite (MgNH4PO4.6H2O). However, that process is expensive, requires reactants, removes only a portion of the nitrogen and may be inhibited by the presence of calcium in the digestate requiring acidification. 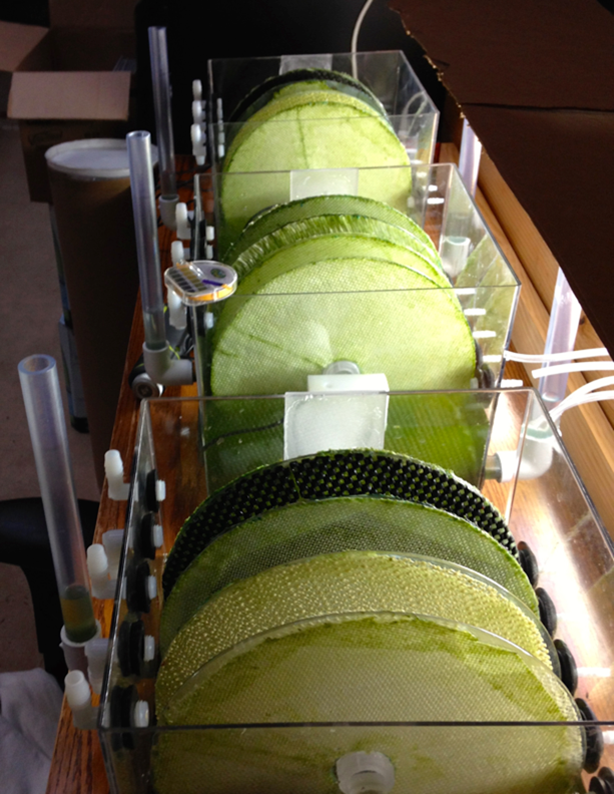 This work was performed to verify a process for recovering ammonia as a highly concentrated and valued ammonium hydroxide and the orthophosphate as solid hydroxyapatite. Based on both previous pilot investigations, and the work of others, the RPB process was expected to remove and recover 80% to 90% of the ammonia and phosphate without the addition of chemicals, at normal digestate temperatures, and ambient pressures. Products that had a value greater than the cost of recovery were expected to be produced. The process uses a single reactor containing concentrated phototrophic organisms (cyanobacteria) that consume the bicarbonate alkalinity of the substrate for growth and thereby raise the pH, shifting the digestate ammonium to ammonia gas that can be stripped at low temperatures. The high pH and low bicarbonate concentration used in ammonia recovery are also required for the precipitation of orthophosphate as calcium carbonate or hydroxyapatite.  The removal and reclamation of both ammonia and phosphate require an elevated pH and low bicarbonate alkalinity produced by the cyanobacteria.

Three laboratory scale rotating photo bioreactors, shown in Figure 1, were constructed to verify the removal and recovery of ammonia as a highly concentrated ammonium hydroxide solution that could be sold as diesel exhaust fluid. The lab scale pilot used cyanobacteria to increase the solution pH and shift the ammonium to ammonia gas that was continuously removed by recycled air flowing over the plates. The bioreactors were operated at 3.5 RPM using different attached growth media, under different lighting (30 – 80 PAR) conditions, stripping gas flow rates, and Hydraulic Retention Times (HRT). Concentrated, turbid, anaerobic centrate, having an ammonia concentration between 1,000 and 2,400 mg/L, was utilized as the substrate.

What We Have Learned?

The laboratory scale pilot bioreactors were able to establish that carbon fiber was the best fixed film media from a variety of inorganic fabrics.  The operation further established that the stripping gas flowing over the cyanobacteria growth plates was sufficient to strip essentially all of the ammonia gas and thus eliminate ammonia toxicity to the cyanobacteria. Light intensity controlled the cyanobacteria growth rates, and thus the pH of the solution. The optimum HRT is yet to be determined. The system is currently operating at a 6 hour HRT but the final value may be significantly lower.  Concentrated (15%) ammonia is currently being recovered but the final values are expected to be greater.

This study investigated most of the variables associated with stripping and recovering ammonia from a turbid, highly concentrated, digestate using a fixed film autotrophic system.  The optimum rotation rate was one of the few variables not thoroughly investigated. The results obtained have established the basis for the design and construction of a pilot facility that will reclaim ammonia as a valued diesel exhaust fluid for Selective Catalytic Reduction (SCR) of combustion NOx thus eliminating, the two primary sources of reactive nitrogen discharged to the environment. Future work will focus on removing and reclaiming sufficient quantities of ammonia as diesel exhaust fluid and testing the fluid in diesel engines that use SCR to remove exhaust NOx.

Nutrient Management aka, Nutrient Reclamation from all organic waste