The objective of this study was to evaluate nutrient dynamics and operational costs within an existing manure Compost Aeration and Heat Recovery system (CAHR) by Agrilab Technologies, Inc. at the Vermont Natural Ag Products (VNAP) compost facility in Middlebury, Vermont in comparison to conventional windrow manure composting where aeration only occurs via turning.  Constructed in 2016 and 2017, the CAHR has been fully operational since 2018 and has proven effective at reducing VNAP’s expenditures on #2 heating oil, propane, diesel fuel, and labor (Foster et al., 2018).

The basic design of the CAHR system includes compost windrows placed on a paved pad containing a shallow trench oriented longitudinally with the windrow.  The trench contains perforated High Density Poly Ethelene (HDPE) piping bedded in wood chips.  These pipes are connected to solid, insulated HDPE piping which runs to a shipping container outfitted with circulation fans and a heat exchanger.  While the circulation fans are negatively aerating (i.e., pulling vapor from) the compost, warm vapor entering the system transfers heat energy to water piped through the heat exchanger.  Heat recovered from compost windrows has been used to heat the site’s bagging building via radiant floor heating and to dry finished compost prior to the screening and bagging process.  Furthermore, due to elevated oxygen levels provided by positive and negative aeration, CAHR-treated compost has been reported to mature more quickly and require less turning, reducing diesel, labor, and equipment maintenance costs (Foster et al., 2018).

Two compost windrows of equivalent feedstock contents and ratios were monitored.  Our control, denoted as “TRAD”, was a conventionally treated windrow that did not receive aeration aside from periodic windrow turning with a Komptech Topturn x53 compost turner.  Our experimental windrow, denoted as “CAHR”, received periodic positive and negative aeration via the CAHR system, as well as aeration through periodic turning.  The initial volumes of the TRAD and CAHR windrows were 480.2 CY and 548.8 CY, respectively.

Compost samples were collected between August 24th, 2021 and December 15th, 2021.  For the first thirteen weeks of the sampling period, samples were taken thrice weekly from both treatments.  At the end of the thirteenth week, on November 19th, VNAP staff deemed the CAHR treatment compost suitable for market and it was pulled for processing.  Sampling continued once weekly for the TRAD treatment for another four weeks, terminating on December 15th, when the TRAD windrow was pulled for processing.  This resulted in a total of 43 samples of TRAD and 39 samples of CAHR composts.

This study evaluated nutrient status, financial cost, and energy cost for a pair of commercial compost windrows in a normal production setting.  From a time and space management standpoint, compost treated with a forced-aeration system was deemed suitable for market in approximately 75% of the time as a conventionally turned windrow; 13 and 17 weeks, respectively.  Analysis of nitrogen species status throughout the study suggests that greater nitrogen losses occurred during conventional treatment than during CAHR treatment, presumably due to higher rates of denitrification and ammonia volatilization.  Data also suggest a lower risk for phosphorus loss through leaching from CAHR-treated compost, as water extractable phosphorus (WEP) concentrations were consistently higher in the conventional treatment.  During the active composting process, it was found that operational costs for CAHR compost were 2.1 times more expensive financially and 5.5 times more energy-intensive than a conventional compost on a per CY basis.  However, the energy and infrastructure cost offsets provided by the CAHR system (as operated at VNAP) could provide a net savings of $4.06/CY finished compost.  In this study, with paired windrows of approximately 12 feet in width, it was shown that a CAHR system produced a comparable compost product, with higher operational input, in less time. 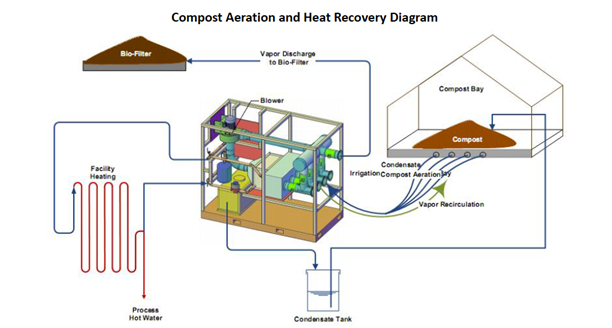 Furthermore, the data suggest that land application of either compost treatment evaluated in this study may reduce phosphorus loss due to leaching versus direct manure application.  For example, WEP concentrations in the finished composts in this study ranged between 0.256 and 0.304 g/kg on a dry weight basis, while WEP concentrations in dairy manures have been found to range between 1.98 and 4.0 g/kg (P. Kleinman et al., 2007; P. J. A. Kleinman et al., 2005).  It is probable that either compost treatment, when applied to agricultural land, would release less phosphorus as WEP during rainfall events than direct manure application, providing water quality benefits.

The Newtrient CIG will continue to evaluate 13 more technologies over the next 2 years to determine their effect on water quality.

The authors are solely responsible for the content of these proceedings. The technical information does not necessarily reflect the official position of the sponsoring agencies or institutions represented by planning committee members, and inclusion and distribution herein does not constitute an endorsement of views expressed by the same. Printed materials included herein are not refereed publications. Citations should appear as follows. EXAMPLE: Authors. 2022. Title of presentation. Waste to Worth. Oregon, OH. April 18-22, 2022. URL of this page. Accessed on: today’s date.