People worry, and I am no exception. I spend more time than I would like to admit on social media, and I have seen some things, disturbing things, things that cannot be unseen. Turns out there is a lot out there to be worried about; so how do I know I am worried the right amount and not too much? For example, I know that antimicrobial resistance (AMR) is a serious and growing health problem, but what does that mean for me? I want to know which aspects of the AMR crisis are going to impact me, which I do not have to worry about, and what I or others can do about it. The first thing I want to know more about is meat safety. I have seen the labels about “antibiotic-free meat”, and I want to know – how safe is my burger? So, I got in contact with some folks who really know meat to find out.

I learned that researchers at the USDA’s Meat Animal Research Center have conducted a series of studies looking at how antibiotic use in beef cattle production could impact AMR present in processed beef. These studies addressed the following questions:

The following summaries of study findings were written by the study authors and reproduced here with permission.

The study reports that the microbial flora and antibiotic resistance levels of CONV and RWA ground beef are similar, with negligible levels of resistant Salmonella, Staphylococcus aureus, and third-generation cephalosporin-resistant E.coli in either type of beef and similar levels of resistant Enterococcus spp. present in both types – roughly 90% contained tetracycline-resistant enterococci, and roughly 25% contained erythromycin-resistant enterococci. These results demonstrate that RWA ground beef does not deliver its major perceived benefit of having lower levels of antibiotic resistance than CONV ground beef when conventional production follows good production practices and correct withdrawal dates for antibiotic use.

Access to antibiotics has greatly increased the health of animals in livestock production. However, concerns have been raised that in-feed use of antimicrobials in livestock feed may increase AMR in bacteria associated with livestock and livestock environments. To test this, researchers considered the effect of a short-term course of antibiotics, given preventatively to calves, on the presence of resistant bacteria and AMR genes in the animals over their entire term in a feedlot environment. 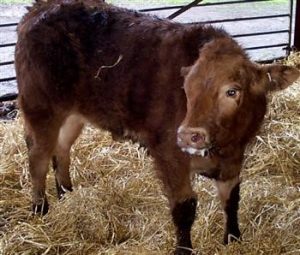 Chlortetracycline (CTC) is an antimicrobial commonly fed to calves shortly after entry into feedlots. This treatment is given for the prevention of bovine respiratory disease. Researchers evaluated the impact of a 5-day in-feed CTC regimen on animal health, AMR in bacteria, and the presence of 10 antimicrobial resistance genes. A control group of cattle (n = 150) did not receive CTC, while a treated group (n = 150) received in-feed CTC from the 5th to the 9th day after feedlot arrival. Fecal swab and pen surface occurrences of antimicrobial-resistant E. coli and AMR genes were determined on five sample occasions: arrival at the feedlot, 5 days post-treatment (dpt) completion, 27 dpt, 75 dpt, and 117 dpt.

No differences in the levels of AMR genes between the CTC-treated and control groups at any time from 5 to 117 days after treatment were observed. On 5 dpt, there was an increase in antimicrobial-resistant E. coli for the treated group vs. the control group. For all other sample dates, there was no difference between the two groups. In addition, there was a significantly higher number of illnesses in the cattle that were not treated with CTC when compared to those animals that received CTC. In conclusion, it was shown that the in-feed CTC treatment reduces the number of illnesses in calves entering feedlot facilities with no long-term impact on the occurrence of antimicrobial-resistant E. coli or on the level of AMR genes.

What is being done to keep meat safe during processing?

Concerns have been raised that pathogenic E. coli and Salmonella strains present in beef cattle feeding operations can develop resistance to antimicrobials critically important to human medicine. These strains may survive food processing, end up in the foods eaten by consumers, and adversely affect human health. In response to these concerns, this study sought to assess standard beef production and processing practices for the persistence of AMR bacteria.

One hundred eighty-four beef cattle were sampled at seven points of processing route (feedlot fecal, processing fecal, feedlot hide, processing hide, preevisceration carcass, final carcass, and strip loin) to determine the occurrences and concentrations of AMR E. coli and Salmonella bacteria. Antimicrobial-resistant E. coli were present on 100% of hides both at feedlots and when cattle begin processing. Antimicrobial-resistant Salmonella were found on 11% of hides at feedlots and on 8% of hides when cattle begin processing.

It was a load off my mind to read those studies and learn that there are strategies in place along the production chain to reduce the risks and help keep my food safe. Nothing is perfect of course; I know there are occasional food recalls when something goes wrong during production, processing, or transporting of foods. Which means I will have to continue to practice good food safety at home; making sure to clean, separate, cook (with a thermometer!), and chill all my food, including fresh beef, and frequently was my hands when preparing or prior to eating food. Still, I am happy to know that I can enjoy a good burger without worrying so much.

Commentary by Mara Zelt,  University of Nebraska, mzelt2@unl.edu with research summaries by: