Why is Feed Management Important?

Feeding swine is the highest economic cost (65 to 70%) for the pork operation. In addition, diet formulation and utilization of the nutrients in the ration by pigs has a major influence on the excretion of nutrients and potentially the balance of the nutrients on a farm. If larger amounts of nitrogen (N) and phosphorus (P) are imported (inputs – animals, feed, and fertilizer purchases, legume fixed N, and N in irrigation water) on the farm compared to the amount of N and P exported off the farm (managed outputs – sale of pigs, crops and/or exported manure) then there is a nutrient imbalance which leads to nutrient accumulation on the farm. A whole farm nutrient balance (WFNB) study was conducted for two years (2006-2007) on 13 pork production operations ranging in size from 2,000 to 16,000-head finisher capacity. For more information about the farms involved in this study go to Overview of Nutrient Management Lessons Learned. Following are some observations from this study related to the feeding programs of the farms and feed management.

Average N and P inputs on the 13 swine farms from feed purchases made up 79% of the total N inputs and 84% of the P inputs for the two year period (Table 1). The range of N inputs from feed was 20 to 95% and the range of P inputs from feed was 23 to 100% for the farms over the two year period. A majority of purchased feed inputs for the farms ranged from 77 to 95% for N and 71 to 100% for P. Farms with lower N and inputs from purchased feed utilized corn grown on the farm versus the purchase of corn for most or all of rations fed. A more common practice is to sell corn grown on the farm and purchase a complete ration including the corn from a feed mill. The average ratio of N and P inputs to managed outputs2 averaged 1.5 for each. However, the range of ratios of N and P inputs to outputs were 1.1 to 2.5 and 0.8 to 2.9, respectively. 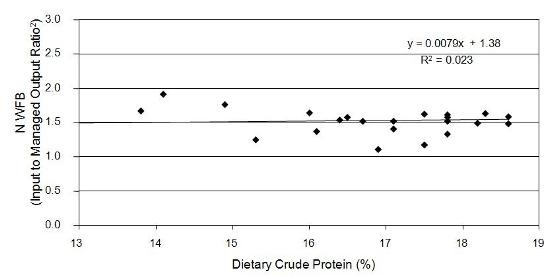 Average dietary protein levels ranged from 13.8 to 18.6% across all operations. There was no impact of dietary crude protein level on the ratio of N inputs to outputs which was surprising. Apparently, even though it was anticipated that the increased crude protein in the diet would increase N excretion and an imbalance in the N ratio, there are other circumstances that over-shadowed any direct impact of crude protein level on N ratio. While the reasons are unknown, there may have been significant differences on N losses during manure storage or other farm system components (e.g. direct ammonia emission from animal housing) which may have overshadowed these results.

There was an indication of an increase in the WFNB ratio of P inputs to outputs as affected by increases in total P in the diet. Average dietary total P levels ranged from 0.40 to 0.75%. The highest (0.75%) P diet content of one farm was due to being a gilt development operation which required higher dietary P levels for improved bone development and longevity in the breeding herd. Although other P inputs from purchased fertilizer can have an impact on the ratio of P inputs to outputs, it is clear that total dietary P is a major factor impacting this ratio. Therefore, any means of improving ingredient availability of P by the use of phytase or utilizing more biologically available P ingredient sources would reduce the amount of inorganic P in the diet. The widespread adoption of these feeding technologies has likely produced significant improvement in swine WFNB in recent years.

The comparison of feed efficiency with WFNB further suggests the importance of feed management decisions (Figure 3). Lower feed required per pound of gain was associated with farms with better whole farm nutrient balances. The combination of dietary concentration (Figure 2) and feed efficiency (Figure 3) explains more than half of the variability observed in Whole Farm Nutrient Balance. 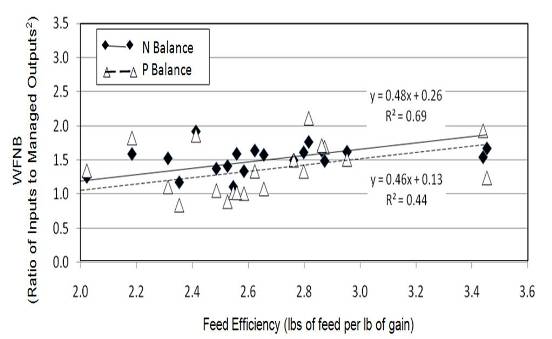 A spreadsheet calculator can be used to determine the potential benefits of reducing the dietary total P level in the diet. Table 2 summarizes an example exercise for one farm. For example, if a 4000 head capacity feeder pig to finish operation with 440 acres in a corn and soybean rotation (Farm A2) currently has a 0.46% total dietary P level. When comparing a lower (0.40% dietary P if phytase and/or ingredients with high P availability is used) and a higher dietary P level (0.60% dietary P), the WFNB ranges from a low of 0.9 to 1 to a high of 1.3 to 1 for P. When the average crude protein levels changed from 16.9% (current practice) to 15.5% or 14.0% (diets based upon crystalline amino acid inclusion or change in dietary ingredients with more digestible amino acids) with this farm, the N balance was reduced and the N ratio for inputs to outputs were reduced from 1.1 to 1.0 and 0.95, respectively. These changes may result in a need for additional N and P purchased fertilizer to meet the needs of the corn/soybean rotation for this 440 acre swine farm no longer met by the nutrients in excreted manure.

Altering the diet formulation of swine rations can have a significant impact on the excretion of nutrients and the WFNB of a farm especially P. Choice of feed ingredients and/or the use of additives that enhance availability of dietary nutrients can help reduce nutrient excretion and reduce farm nutrient imbalances.

This project was funded by The National Pork Board Project

Note: This page is still undergoing the peer review process.

1Manure exported from farm.
2For explanation of WFNB Ratio, Inputs and Managed Outputs, refer to Introduction to WFNB