Where Are Animal Agriculture Farms Most Common?

The animal agriculture industry is widespread across the U.S. with some areas having more of certain types of farms than others. The sectors highlighted in this module include dairy, beef cattle, layer chickens (eggs), meat chickens (broilers), and pigs.

The images below shows where each of the five highlighted sectors are located in the U.S. The darker colors on each map indicate more animals in that area. These maps are based on the most recent (2012) Census of Agriculture, which is conducted every five years by the USDA National Agriculture Statistics Service. 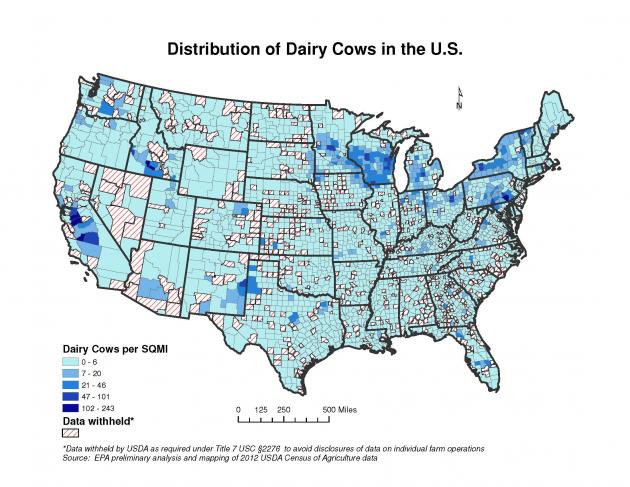 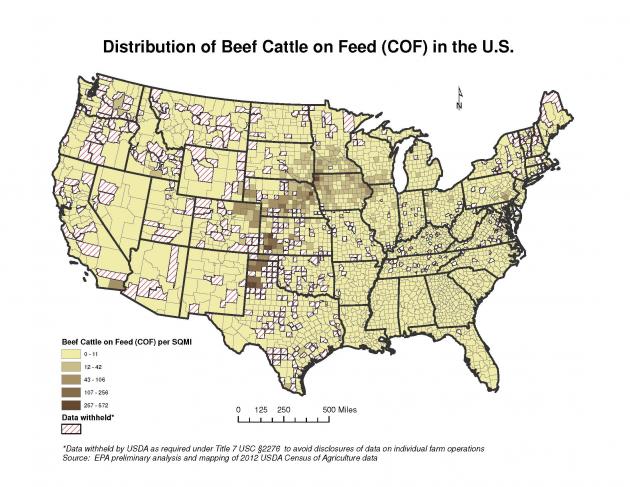 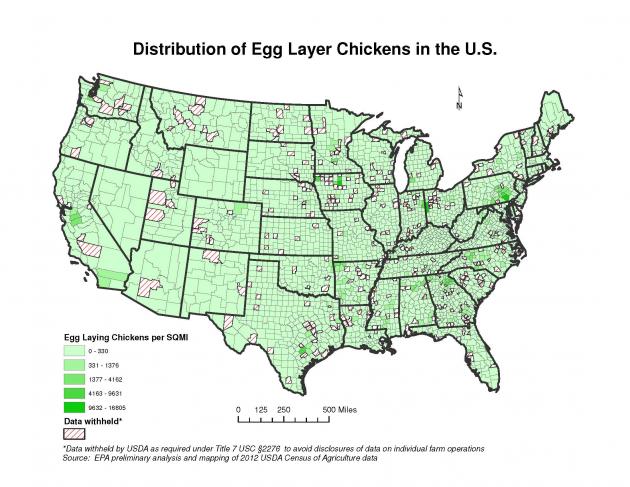 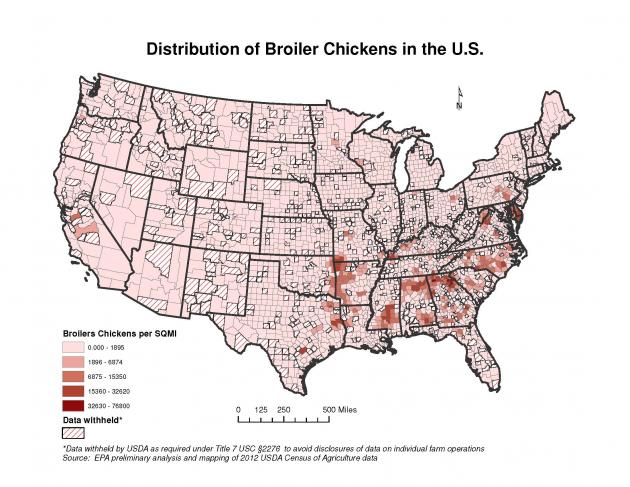 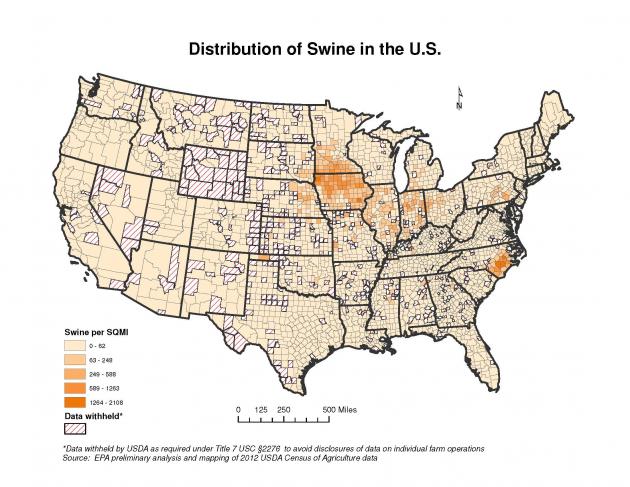 The graphs below show data from the USDA Census of Agriculture from 1987 until the most recent one (2012).

How Much Manure Do Animals Produce?

The amount of manure animals produce varies greatly based on species; a dairy cow will produce much more manure than a chicken, for example. Two cows can excrete very different amounts of manure based on the feed they eat, their size, and age. The same is true of chickens and pigs.

The American Society of Agricultural and Biological Engineers (ASABE) released standard D384.2 “Manure Production and Characteristics” in 2005. Table 1 and Table 2 of that standard provide numbers that are similar to the NRCS manure production estimates. The ASABE standard estimates that a layer hen will excrete 0.19 pounds of manure per day and a dairy cow (weight not specified) will excrete 150 pounds per day.

The amount of manure an animal excretes is not necessarily the same amount that farms collect or store. For animals housed in open lots, manure dries considerably as it lays on the surface of the pen. For example, a feedlot steer may excrete 80 or 90 pounds of manure per day, but after that manure has dried on the pen surface, the farm may only end up with 8 or 9 pounds of manure to collect. The same goes for layer hen manure on manure belts or in storage structures.

For animals housed in barns with flush systems, the total volume will include animal manure, wasted feed and water, and water used for the flush system.

How Has Manure Management Changed?

In decades past, most farms handled manure as a solid* material, often mixed with bedding, and hauled the manure and bedding out to a field regularly, referred to as “daily haul”. Photos 1 and 2 (below) show what a daily haul system looks like. 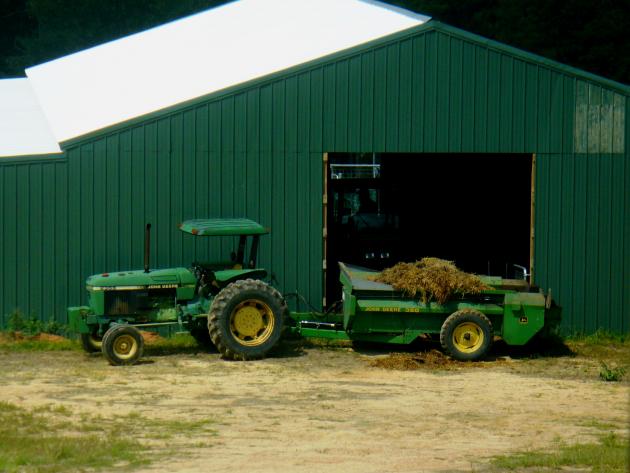 Photo 1. (Above) A spreader being loaded with manure directly from the barn. 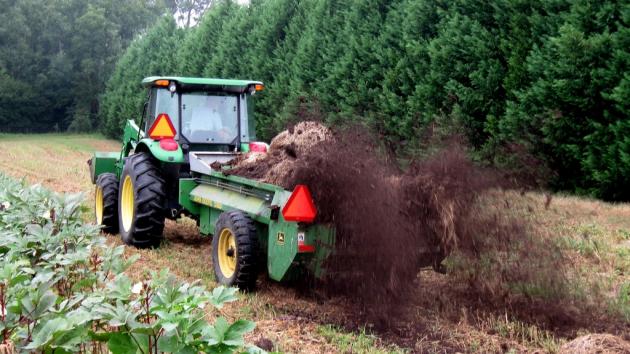 Photo 2. (Above) Spreading manure in a recently harvested field. Photos 1 and 2 are courtesy of Anne Cumbie Randle.

As farms have grown larger, and technologies improve, more manure is being handled as a slurry or liquid* — especially on dairy and pig farms. Beef cattle feedlots, and layer chicken and broiler farms mostly handle manure as a solid.

The volume of manure generated on many modern animal feeding operations necessitates storing manure in engineered structures. Manure storage has become a more visible feature on farms compared to past decades.

The primary purpose of storage systems is to provide a place to contain manure so that farmers can apply manure to fields at times when nutrients can best be utilized by crops and thereby avoid applying it to fields at inappropriate times such as when soils are frozen, snow-covered or saturated. Avoiding these times reduces the risk of runoff to water and soil compaction. Also, while not yet common, manure treatment systems that generate renewable energy or process manure for other value-added products start with storage.

* Solid manure is generally at least 20% solids and 80% or less moisture but can be stacked and piled. Liquid manure is usually 5% solids and 95% or more moisture. Slurry manure is in between. Both slurry and liquid manure are moved via pumps. (See Figure 1 on page 11 of LPES Lesson 20).

The Basics of Manure Management

The components of a manure management system include:

Collection. How much manure is produced by the animals on the farm? How will the farm gather manure for storage?

Storage. How will the manure be contained until it can be used or treated? Photos 1-3 below show some examples of manure storage.

Treatment. Not all systems are designed to include manure treatment. Treatment systems tend to be very expensive, but they can lead to new uses for manure or new revenue streams for the farm. Anaerobic or aerobic lagoons, composting, anaerobic digestion, vermicomposting, and thermal technologies are examples of manure treatment.

Transport. How will the manure be moved from the storage structure to the field or to its intended use?

Utilization. Manure has many beneficial uses. The most common use (by far) is land application as a plant fertilizer.

Recommended Resource: University of Minnesota videos on the “Basics of Manure Management“ 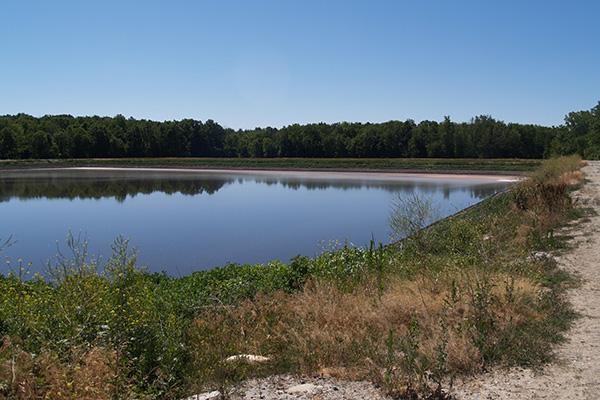 Photo 1. (Above) An earthen liquid manure storage structure. Ideally, this type of manure storage would have a marker installed that indicates when the liquid level reaches the maximum design limit (a depth that provides enough capacity to store the expected volume of wastewater plus a margin of safety in case of a large rainfall or prolonged period of bad weather that prevents pumping out to a field). Photo courtesy of Tetra Tech. 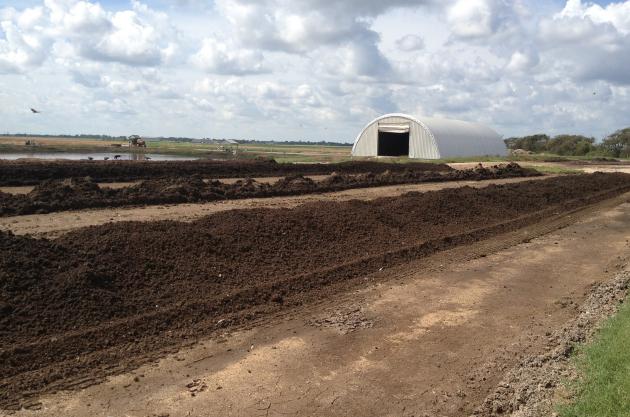 Photo 2. (Above) A storage area for solid manure.  It is important that any runoff from this area is captured and contained. Photo courtesy of Saqib Mukhtar, University of Florida. 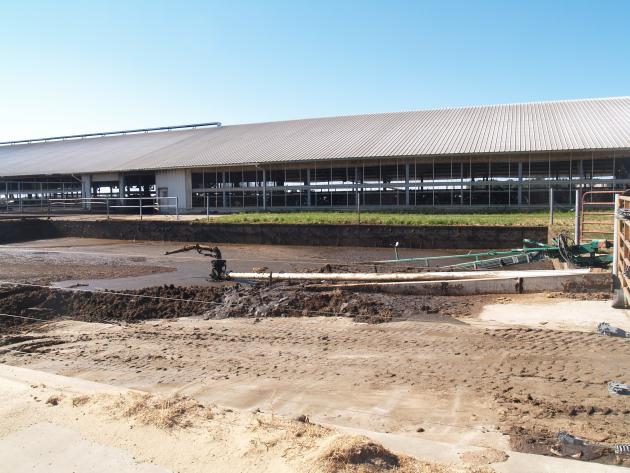 Photo 3. (Above) A concrete storage structure for slurry manure on a dairy farm. The ramp in the foreground allows access to remove accumulated solids.

A Look at Five Different Types of Animal Agriculture

Click on a photo to start a short virtual tour showing the outside, inside, and basic manure handling and storage practices on layer, beef, pig, dairy, and broiler farms. These tours discuss typical manure collection intervals and practices along with typical storage facilities and management. Links to additional resources are provided throughout the text and at the end of each tour.

For the fun activity below, use the scroll bar at the right of the frame to move down and show the “continue” or “submit” buttons if they do not appear.

Next: What Does Manure Collection and Storage Look Like?

For questions on these materials, contact Jill Heemstra, jheemstra@unl.edu. All images in this module, unless indicated otherwise, were provided by Jill.