Why Did We Study Mixing Duration?

Mixing is an important parameter for anaerobic digesters for both design and operation. This is especially true for digesters that treat diary manure, which is a mixture of feces, urine, blood, food wastes, and bedding. Many of the solids fed to the digester have no or low degradability, and some of the large fibers can clog pumps or pipes in the transfer system. Mixing also plays an important role in maintaining a uniform environment for biological processes. However, the energy input for operating mechanical mixers requires a large part of the total energy for a biogas plant. Previous studies have suggested that optimum biogas production does not require continuous active mixing. It is essential to evaluate the mixing duration in order to balance energy inputs and biogas production rates.

The study was designed as a one factor (mixing duration) experiment with three levels and was carried out in triplicates. Three pilot scale anaerobic digesters were used to compare the impact of different mixing duration (continuous – CON, intermittent – INT, and no mixing – NO) on the performance of biogas production from dairy manure, Figure 1. 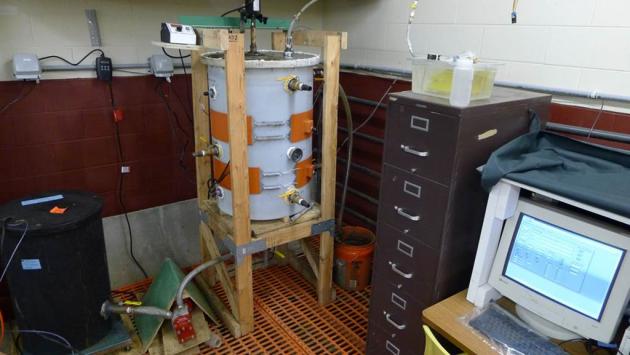 During the experiment, all digesters were fed 8 kg of dairy manure daily (total solid content = 5.5%), and operated at 37oC with a hydraulic retention time (HRT) of 21 days.  The mixing and feeding were controlled by an automated computer system, Figure 2. Mixers were set at a speed of 450 revolution per min (RPM). Biogas production was recorded three times a week and the percentage of methane content was analyzed weekly. Manure samples were collected weekly from the feed tank, top, middle & bottom of the digester, and from the effluent tank for volatile solids (VS), chemical oxygen demand (COD), pH, carbon to nitrogen ratio (C/N), and violate fatty acids (VFAs).  The concentration of archea and five common methanogens found in digesters was also determined using quantitative polymerase chain reaction (qPCR). 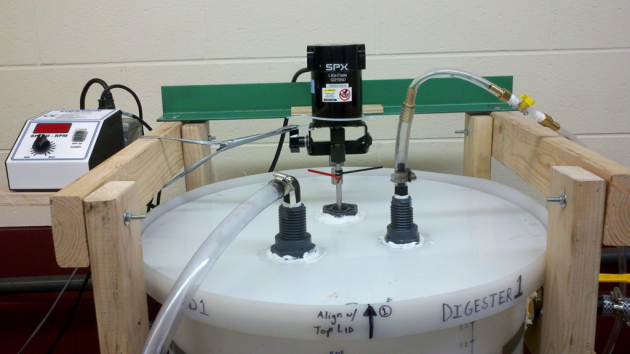 The cumulative biogas production from digesters with no mixing was statistically significantly higher than intermittent and continuous (CON) mixing at the same loading rate. However, CON had a higher methane production rate per kg of volatile solids destroyed, Figure 3. 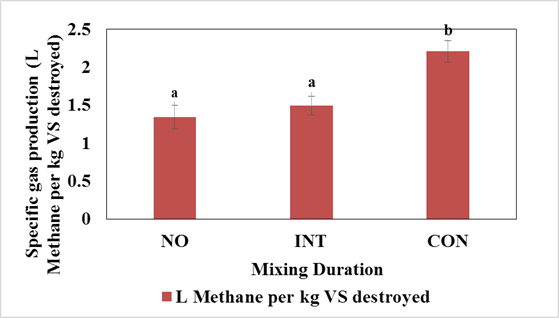 This material is based upon work supported by the National Institute of Food and Agriculture, United States Department of Agriculture, under ID number WIS01693.