In the United States, animal agriculture is the largest source of ammonia (NH3) emissions that are a major air and water pollutant contributing to eutrophication, soil acidity, and aerosol formation that can impair atmospheric visibility and human health. Ammonia volatilization occurs when excess crude protein (CP) is fed and excreted as urinary nitrogen, primarily as urea. Information regarding NH3 emissions from equine operations is limited. It is generally understood that air quality in stables can adversely affect both horse and human health, however, the effects of different housing systems and nutritional management of horses on air quality have received little investigation.

In the first study, 9 mature horses were used in a 3 X 3 replicated Latin square design study to determine the effects of dietary CP concentrations on potential NH3 losses from feces and urine. Horses were fed 3 diets formulated using bahiagrass and Tifton-85 bermudagrass hays and a commercial vitamin mineral supplement. The 3 diets differed in dietary CP concentration and were labelled as: LOW-CP, MED-CP, and HIGH-CP (10.6, 11.5 and 12%, respectively). Total collection of feces and urine was conducted over 3 days. For in-vitro determination of NH3 concentrations, urine samples were pooled and mixed with either wheat straw or wood shavings, while fecal samples were pooled and mixed with wheat straw. Ammonia emission by these samples was measured using a vessel emission system with an airflow rate (2.5 L min-1) at 20°C over a 7-d period. Concentration of NH3 in each vessel was measured using a photoacoustic multi-gas analyzer. Temperature, airflow rate and NH3 concentration in each vessel were used to calculate NH3 emission rate (ER).

The objective of the second study was to determine air emissions from 4 Mid-Atlantic equine operations as affected by housing type and feeding practices. A questionnaire was administered to respective farm managers to record facility and individual stall dimensions, daily cleaning practices, and feeding practices. Farm A was a University riding stable, Farm B was a University breeding farm, Farm C was a racehorse training facility, and Farm D was a Standardbred breeding facility. At least 4 stalls were chosen in each facility based upon location within barn to quantify NH3 concentrations. Body weight, breed, age, class of horse, exercise schedule, and time spent in the stall were recorded for the horses in the selected stalls. For analysis of NH3 concentration, air samples were collected from stall floors using a dynamic flux chamber and concentrations measured using a photoacoustic NH3 analyzer. To achieve a representation of NH3 emitted from stall surfaces, 5 locations were selected and measurements taken at approximately the same time each day. Temperature, airflow rate and a weighted concentration of NH3 in the flux chamber were used to calculate NH3 emissions. 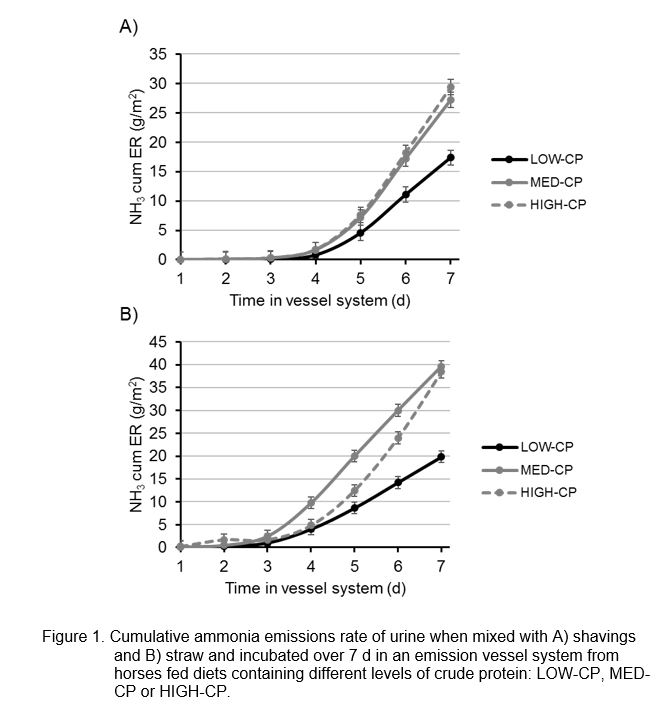 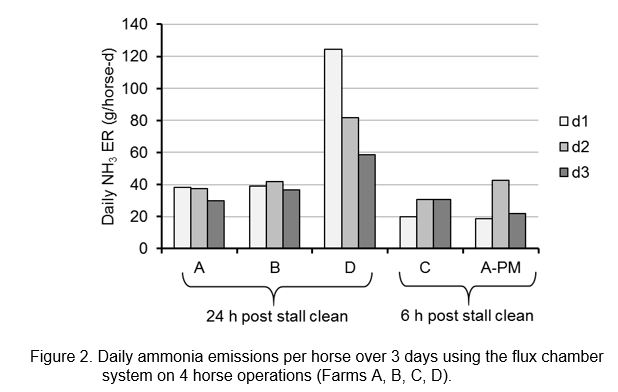 When measuring NH3 concentrations and calculating the ER in-vitro, urinary-N was the main source of NH3 volatilized from equine manure, potentially due to the high urea-N concentration in the urine. Cumulative fecal NH3 emissions ranged from 19.7 to 39.8 mg/m2 and contributed only a small amount in comparison to the NH3 lost from urine. While dietary CP intake did not influence NH3 emissions, cumulative emissions tended to be higher when horses consumed more CP. Urinary NH3 emissions were greater when mixed with wheat straw compared to wood shavings. This study shows there may be a relationship between dietary CP intake and potential NH3 losses from equine urine under laboratory conditions. When estimating NH3 emissions on the 4 equine operations, greater dietary CP intake was associated with increased urinary NH3 volatilization. Daily CP intake ranged from 149-211 % above NRC CP requirement. Estimated NH3 emissions from facilities ranged from 18.5 to 124 g d-1 horse-1 and were similar to emissions previously reported from other large livestock species. Differences in NH3 emissions could be due to several factors including cleaning practices and ventilation rate. These studies provide a better understanding of the impact equine operations are having on atmospheric NH3 levels.

Future research will aim to quantify NH3 emissions from entire equine operations as well as accounting for diurnal, seasonal and regional fluxes in NH3. In addition, there is interest to determine how protein quality will affect NH3 emissions from horse urine.

Additional information regarding these projects is available by contacting Jessie Weir (jessie23@ufl.edu), or Carissa Wickens (cwickens@ufl.edu).