Poultry litter is recognized as an excellent source of the plant nutrients nitrogen, phosphorus and potassium. In addition, litter returns organic matter and other nutrients such as calcium, magnesium and sulphur to the soil, building soil fertility and quality. 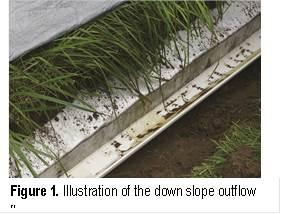 Pasture plots, which consisted of ryegrass, fescue grass, bermudagrass and some Johnsongrass, were established at the Eastern Oklahoma Research Station located in Haskell, OK. Cattle had not been allowed access to the pasture for over one year and poultry litter had previously been applied one year prior to the study. Broiler litter was applied to 14 plots at a rate of 2.2 tons/acre. Two control plots received no litter application.

An artificial rainfall simulator was used to produce 2 yr and 5 yr storm events. Rainfall was applied at 0 h, 24 h and 120 h after litter application. Surface runoff was collected using a flume installed in a trench (Figures 1 and 2). Water samples were tested for E. coli populations. 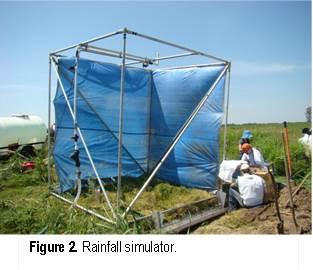 Results of this study showed that E. coli event mean concentrations (EMC) in sampled runoff decreased at 24 h and 120 h when compared to 0 h after litter application (Table 1). However, a slight increase in populations was observed at 120 h as compared to 24 h. This slight growth may have been due to litter in contact with the soil surface and protected from ultraviolet light and moisture loss by vegetative cover.

In control plots, E. coli was always detected, indicating other sources of E.coli aside from poultry litter. Other sources may include rodents, birds, and other small mammals.