Determine the effects of moisture, temperature and within pen location on odorous emissions from pen surfaces generated from cattle fed a diet containing 30% wet distillers grain plus soluble (WDGS). This work is focused on developing precision practices for mitigating odor.

A laboratory study was conducted to determine effects of pen location, moisture, and temperature on emissions of volatile organic compounds (VOC). Feedlot surface material (FSM) was obtained from pens where cattle were fed a diet containing 30% wet distillers grain plus soluble (WDGS). The FSM were collected from the bunk, drainage, and mound areas within three feedlot pens. The FSM were mixed with water to represent dry, wet, or saturated conditions and then incubated at temperatures of 5, 15, 25 and 35ºC. A wind tunnel and TD GC/MS were used to quantify emissions of eight volatile fatty acids (VFA), five aromatics and two volatile sulfur compounds (VSC). 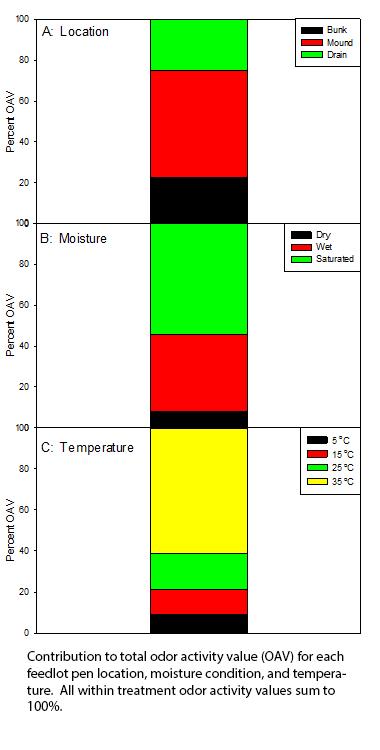 More than half of the OAV occurred at the base of the mound with the bunk and drainage contributing approximately equally to the remainder. The frequent wetting and drying cycles occurring near the base of the mound may contribute to a more diverse microbial population when compared with the chronically wet to saturated conditions existing behind the feed bunk.

Temperature significantly affected OAV with over 60% of the total OAV occurring at 35ºC. The 35ºC temperature increased each odor compounds with the impact being the greatest for VSCs. It appears from this study, odor emissions are greatest during warm (i.e. > 25ºC) wet periods and from specific location within the pen.

Understanding the spatial variability of odor emission is important in the development of cost-effective management practices. Based on the results from this investigation, field-scale studies will be conducted to develop precision odor mitigation practices.