To provide an initial characterization of the wet and gaseous organic feedstocks available in the continental U.S., and to explore technological possibilities for converting these streams into biofuels and bioproducts.

The Bioenergy Technologies Office (BETO) of the U.S. Department of Energy commissioned an in depth resource assessment by teams at the the National Renewable Energy Lab (NREL) and the Pacific Northwest National Lab (PNNL). Concurrently, BETO conducted a series of workshops, informed by an extended literature review and several rounds of peer review to ascertain the states of technologies for making biofuels and bioproducts from these resources. These efforts resulted in a January 2017 report that is available here:

Terrestrial feedstocks are currently the largest resource generated for the bioeconomy, estimated at 572 million dry tons for 2017 (Billion Ton 2016), and have traditionally constituted the primary focus of the Bioenergy Technologies Office (BETO). However, the resource assessment conducted by the National Renewable Energy Lab and Pacific Northwest National Lab indicates that wet waste feedstocks (Summarized in Table ES-1) could also make significant contributions to the bioeconomy and domestic energy security goals. 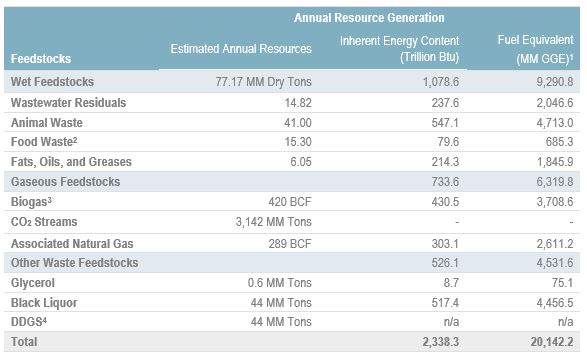 2 The moisture content of food waste varies seasonally, ranging from 76% in the summer to 72% in the winter.

As illustrated by example in Figure ES-1, wet and gaseous waste streams are widely geographically distributed, frequently in areas of high population density, affording them unique current and emerging market opportunities. The size of publicly owned treatment works, landfills, rendering operations, and grease collectors overlay with the largest population centers nationwide. Therefore, when compared to terrestrial feedstocks, these waste streams are largely aggregated and any derivative biofuels, bioproducts, or biopower are close to end markets. 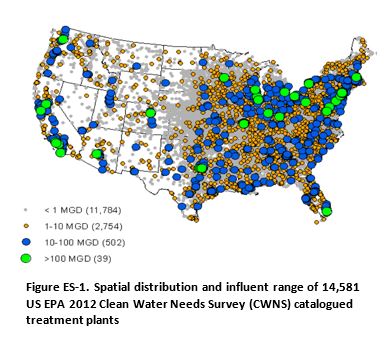 At the same time, however, this close proximity to populations markets often correlates with more stringent regulatory landscapes for disposal. Therefore, the value proposition presented by these waste streams commonly includes avoiding disposal costs as opposed to an independent biorefinery that requires stand-alone profitability. Aided by these and related factors, public and private entities are actively exploring and deploying novel solutions for waste stream valorization. Potential competition between biofuels, bioproducts, and other beneficial uses will likely be a key element of future markets, and clearly merits further analytical and modeling investigation.

This report concludes that wet and gaseous organic waste streams represent a significant and underutilized set of feedstocks for biofuels and bioproducts. They are available now, in many cases represent a disposal problem that constitutes an avoided cost opportunity, and are unlikely to diminish in volume in the near future. As a result, at least in the short and medium term, they may represent a low-cost set of feedstocks that could help jump start the Bioeconomy of the Future via niche markets. While much modeling, analysis, and technological de-risking remains to be done in order to bring these feedstocks to market at significant scales, the possible contributions to the overall mission of the Bioenergy Technologies Office merit further attention.