Over-wintering beef cattle on pastures in the Eastern half of the USA has been shown to increase runoff, sediment loss and nutrient transport. Traditional barn lot winter feeding areas, or ‘sacrifice’ areas, for beef cattle can be a significant source of nutrient and sediment pollution. Sustainable and affordable approaches are needed that effectively control manure nutrients during the winter feeding period, while ensuring a healthy and comfortable animal environment. The use of woodchips as a surface material for areas used to hold cattle during wet periods is practiced on a limited basis in Ireland, Scotland, and New Zealand. The application of this simple technology in the cool Eastern part of the US that has a humid climate, has potential to improve animal comfort and health, protect winter pastures, and reduce the environmental impact of winter feeding and loafing areas.

Beef cattle producers in United Kingdom, Ireland and New Zealand have shown a positive conservation effect using out wintering pads constructed with wood chips, allowing the pastures to be destocked. Out Wintering Pads (OWPs) are outside loafing areas for cattle. OWPs are typically constructed adjacent to a concrete feeding area and a watering facility. The OWP design allows for 150 square feet per cow. The chip size is critical for proper functioning of the manure storage system. Use of fist to palm sized chips are recommended to allow dung to filter into the pad. Smaller chips can be used but will need to be renewed sooner. Manure is worked down below the surface of the pad by the cattle’s hoof action. Initial depth of chips needs to be no less than 12 -15 inches deep. The site must be prepared with a drainage system using drain pipes every 10 feet to prevent moisture accumulation within the OWP (Figure 2). This effluent must be managed with a storm water retention pond and vegetated filter strip. 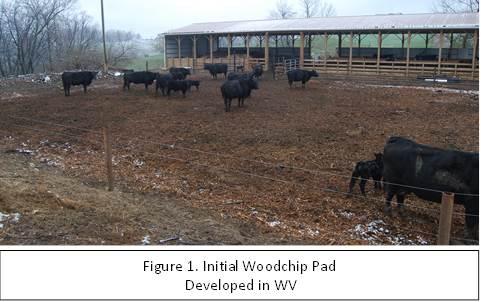 Two woodchip-surfaced heavy use areas have been installed and monitored in West Virginia. The first was installed on a private farm with a cow/calf enterprise in Northern WV during 2011 (Figure 1).

The design criteria were adopted from a guidance document developed by the Irish Department of Agriculture and Food. This wood chip pad was placed adjacent to a USDA NRCS roofed winterfeeding area and roofed manure storage. Woodchip quality was determined and temperature and precipitation monitoring occurred for a 23 month period including two winter stocking periods. Effluent water quality grab samples were taken during that monitoring period. A second chip pad was constructed in WV on the West Virginia University (WVU) Animal Science Experiment Station Farm during 2014. This area consists of two loafing paddocks, one constructed with single species white oak wood chips and the other with mixed hardwood chips made up primarily of mixed yellow-poplar and oak. Bench scale columns with various configurations of thermally treated wood chips were evaluated in 2014. 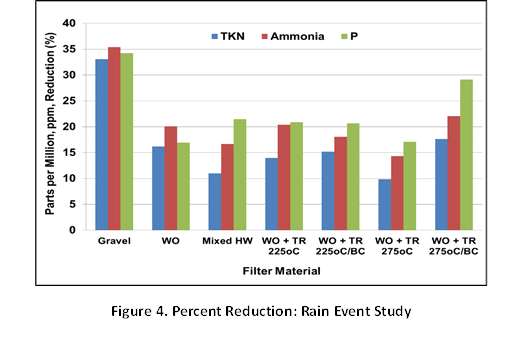 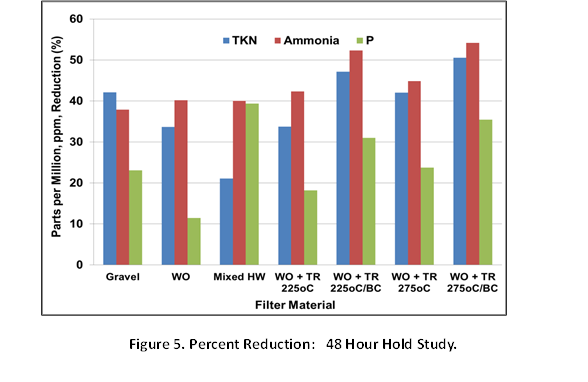 The biomass mixes that have demonstrated the best performance are being added as treatments in small cell areas on the WVU woodchip heavy use area. The treatment cells are being monitored for runoff flow amounts and water quality.

Further research is needed to determine optimum chip species and chip size for moisture retention and nutrient capture capabilities. Development of complimentary systems to treat the effluent produced from periods of runoff are needed as vegetated treatment areas may not function well during the winter when WV soils are typically saturated and runoff occurs instead of infiltration.