What Is Being Measured?

The objectives of this research project are to monitor the indoor air quality of a deep-pit; wean-to-finish pig building over one pig-growth cycle (six months) by semi-continuously measuring concentrations of ammonia (NH3), hydrogen sulfide (H2S), carbon dioxide (CO2), methane (CH4), and volatile organic compounds (VOCs) and intermittently measuring particulate matter (PM10) and odor. The project will also monitor semi-continuous emissions of NH3, H2S, CO2, CH4, and VOCs plus intermittent sampling of odor emissions from the barn’s pit and wall exhaust streams over the six month growth period. Energy usage, both electrical and LP gas usage will be measured for both pit and non-pit ventilated rooms over the pig growth, along with pig performance (daily gain, feed efficiency, and death loss) between the rooms.

A cooperating pork producer is being located in southern Minnesota with a tentative starting date of July 1, 2008 for data collection.

Does the Use of Pit Fans Make a Difference in Air Emissions from Deep-Pit Pig Barns?

Air emissions from tunnel ventilated pig finishing barns have been monitored and partitioned between pit and wall fans during the past two years in Minnesota. The results showed that a disproportionate amount of hydrogen sulfide (H2S) and ammonia (NH3) emissions were emitted from the deep pit finishing barn through pit fans even though it was concluded that “pit” ventilation has little effect on the barn’s indoor air quality (figure 1). Thus producers might be able to reduce emissions of these hazardous gases and the associated odor of these gases simply by limiting or not using pit ventilation fans. Such a strategy would save electrical energy use since larger more efficient wall fans could replace the less efficient pit fans. 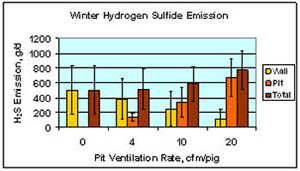 Data collected from the deep pit facility will be used to determine the benefit of pit fans to indoor air quality in swine wean to finish buildings and what impact the use of pit fans has on energy usage and gas, odor, and particulate matter emissions from this stage of pork production buildings .