The poultry industry is a major part of the agricultural industry in the United States, and an awareness of the carbon footprint of the industry is important for future growth and development. With carbon footprint estimated to be as high as 18% of total Green House Gas (GHG) emissions, changes in U.S. animal production systems will be a component in mitigating the impacts of the industry on climate change. Changes in GHG emissions from the poultry industry can be achieved only if the industry knows the levels of greenhouse gas emissions contributed as a result of poultry production.

The Poultry Carbon Footprint Calculation Tool (PCFCT) was developed and designed specifically for poultry production farms. The tool can be used to estimate the greenhouse gas (GHG) emissions from pullet, breeder and broiler grow-out farms. While several life-cycle assessments have been completed for the production of poultry meat, there is no industry specific carbon footprint calculation tool available for the production phase of the poultry industry and since the poultry farmer only has control over the activities that take place on his farm, he can only make reductions of emissions at the farm-gate level. It is therefore important that a tool such as the PCFCT is available to deal with the farm level emissions.

The GHGs that are assessed are carbon dioxide, nitrous oxide and methane which are the gases of major concern in agriculture. The specific objectives of this study was to develop a computer-based, user-friendly calculation tool to assess greenhouse gas emissions from poultry farms and also to identify abatement strategies in on-farm management practices to reduce the footprint on farms. The user friendly PCFCT is an Excel spreadsheet into which the user will enter farm data to calculate the annual carbon footprint (Figure 1). The research included an assessment of the carbon footprint of test farms under industry management standards with focus placed on management practices and farm-expense data, particularly with regard to expenditures for energy-intensive inputs such as electricity and fuel which are the largest contributors to GHG emissions for poultry farms. This was used to identify potential areas of change.

The calculation tool was developed and then used to estimate the emissions from 30 test farms from three poultry companies in three different regions in Georgia.

We observed that the major sources of greenhouse gas that are emitted on poultry production farms were from gas use and manure management. Based on these observations, the tool was then equipped to recommend improvements to the farm, which would in turn show the user potential reductions in GHG emissions and cost savings if the recommended improvements were implemented. The results from the study showed that there were significant differences in emissions from mechanical sources and electricity use between the southern region and the northern and central regions of the state (Table 1). The differences observed could be a result of; climatic differences, the dead bird disposal methods and also the duration of time the flock is kept on the farm. 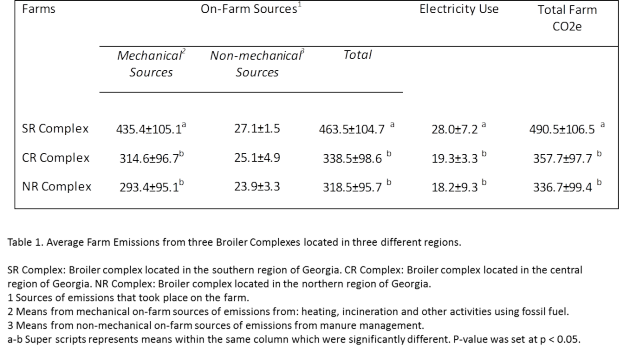 The tool is also very useful for record keeping as it is designed with a printable inventory which will allow users to track and compare their emissions from year to year. It is also equipped with bar charts to show the user their current emissions compared to projected emissions if they apply the recommended changes. A second graph shows the percentage of emission from each source.

The tool will be made available on the departmental website (uga.poultry.edu) for poultry producers, poultry company environmental personnel and extension personnel to utilize. Articles relevant to the subject will also be made available to users of the tool. Other future plans include incorporation of other segments of the industry (layer and turkey) into the tool.

Funded by US Poultry & Egg Association 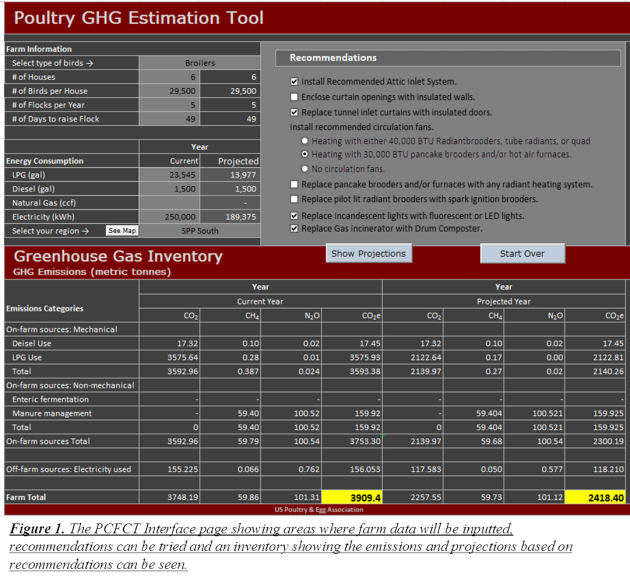